As the year comes to an end here at Screaming Frog we thought we would add to the inevitable roundups posts with our own. But instead of just bragging about the work we do or making pointless ‘SEO predictions for 2019’, we also want to celebrate the people that make the company what is it (we are also bragging, but we’re not just bragging). So take a look at what your favourite frogs (sorry Kermit) have been up to this year!

With so many fantastic conferences available to us in digital marketing, we’re spoiled for choice to choose which one to have some time off work learn from the industry’s best and brightest.

For the first time ever Screaming Frog had a stall this year, helping the community at our crawl clinic with Spider conundrums. We had a great time so expect to see us with a stall at more BrightonSEOs in the near future, now we’ve mastered SEO (Stall Engineering Optimisation)! Reminder to self – bring more swag. 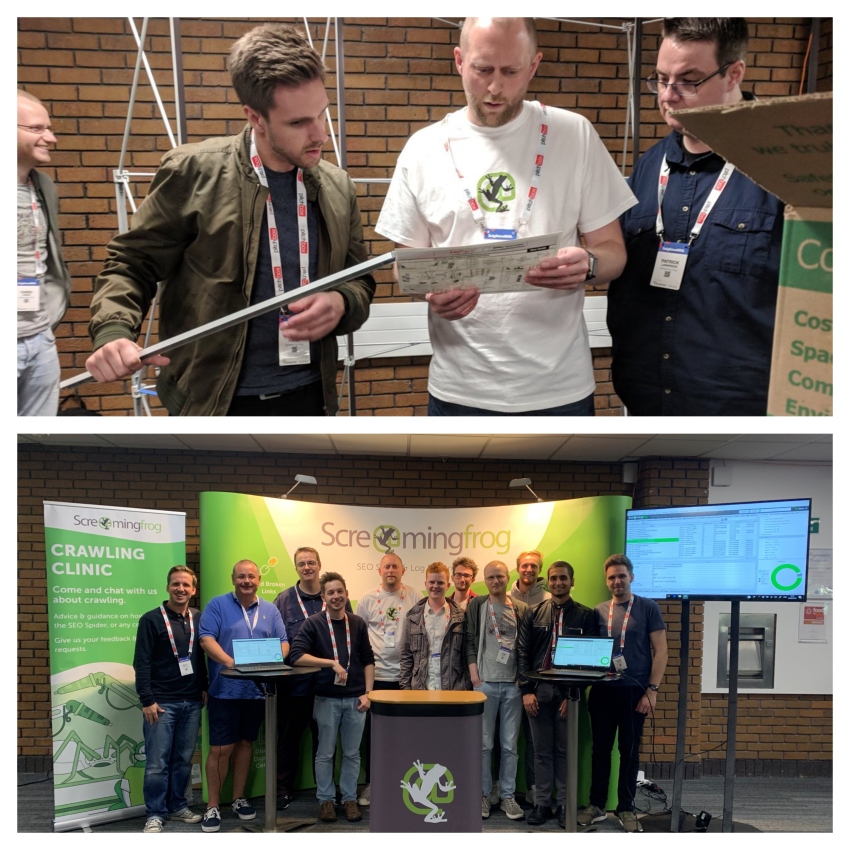 We also like to get involved in other ways – our resident Strategist Charlie has also been running the Crawling and Indexation Indexing sessions at BrightonSEO (shameless plug – we’re running a similar SEO Spider training workshop in January!), and be sure to check out Oliver Brett’s talk next April! Not to be missed! 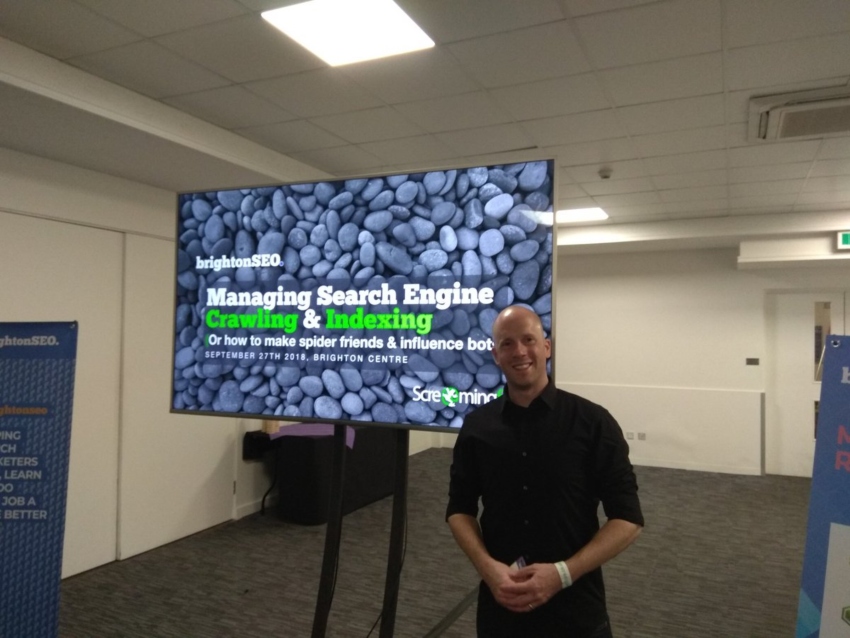 SearchLeeds was where Oliver, rumoured to be the mastermind behind Twitter’s favourite SEO meme account Lord of the SERPs, made his speaking debut this year and a fantastic conference held in a great city. How he managed to keep the topic of “Why SEOs are weirdos” down to just a few slides is testament to his speaking prowess. 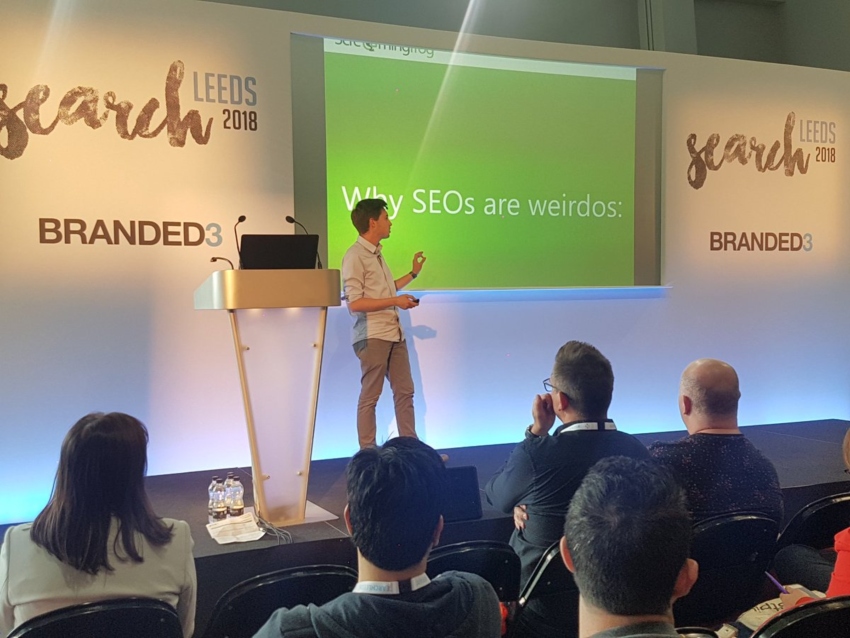 Determined to show the SEO team they do more than just “set it and forget it”, the PPC team headed up to London for HeroConf. Despite rave reviews about the conference, the SEO team remain unconvinced by the PPC team. 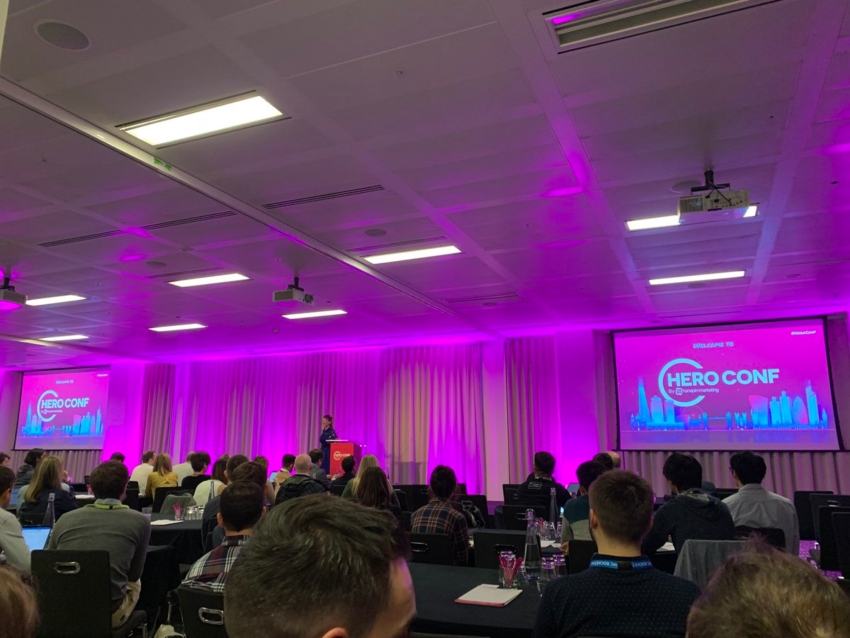 Being the creative force behind almost everything we produce, and after seeing the SEO team heading out for ANOTHER conference, the design team headed up to London for an inspirational masterclass from the man behind some of the best content on the web – Information Is Beautiful. They brought their knowledge back to share with the SEO team, which resulted a creative boost that can only be compared to a strong coffee on a Monday morning.

Having launched a couple of years ago OutREACH conference has fast become one of the must-attend conferences at Screaming Frog. The team returned with fresh ideas for the ever more difficult task of outreaching, from quality speakers and we’re looking forward to seeing what next year has to offer!

Another conference held in very high esteem around the Screaming Frog office is Distilled’s SearchLove. A couple of our team headed up to London (we’ll hit the US iteration one of these days!) and were once again blown away by the expertise on offer.

During June we ventured into London for the popular Search Elite conference, which fully delivered on its promise of in depth presentations from expert speakers hailing from both sides of the Atlantic. Look out for the 2019 edition which has been rebranded to Digital Elite Day, combining the best from the worlds of search and CRO. 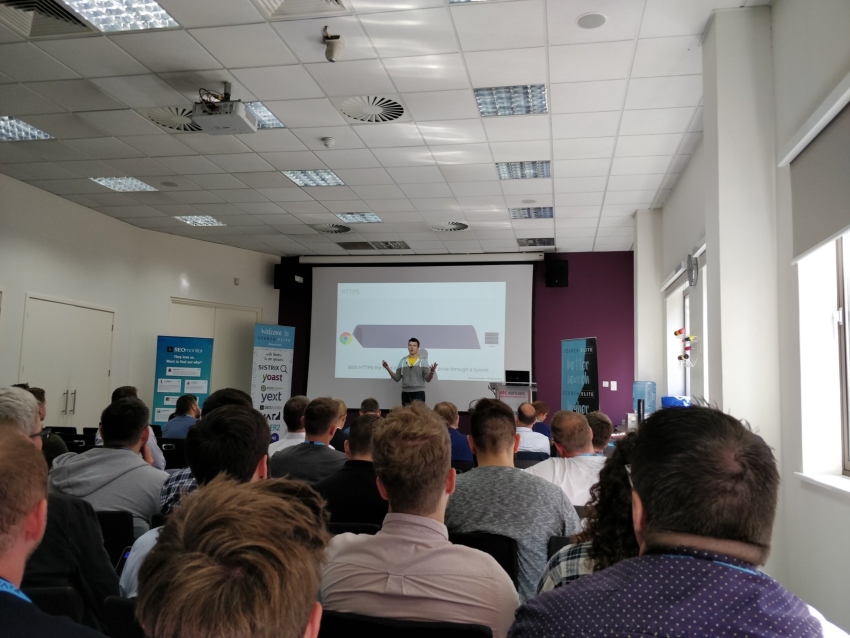 Perhaps a little less SEO focussed, but no less interesting was Nudgestock. Full of behavioural ideas that can be applied to a whole range of settings, a highlight was the behavioural nudges that can be used to increase conversion rates.

And how could we forget the 5 a side tournament hosted by BrightonSEO and Deepcrawl. The game on everyone’s lips was “El Crawlico” as we took on Deepcrawl to determine once and for all the superior crawler result which has no further implications on the quality of each respective tool.

Without wanting to dwell on the matter 9-2 much, Screaming Frog came away victorious! Looking forward to the battle next year!

One of the big events at the end of the year is of course, the UK Search Awards, celebrating the great work that’s been done by our industry. With only 35 awards up for grabs in a hugely competitive industry we had the honour to be shortlisted in 3 categories… 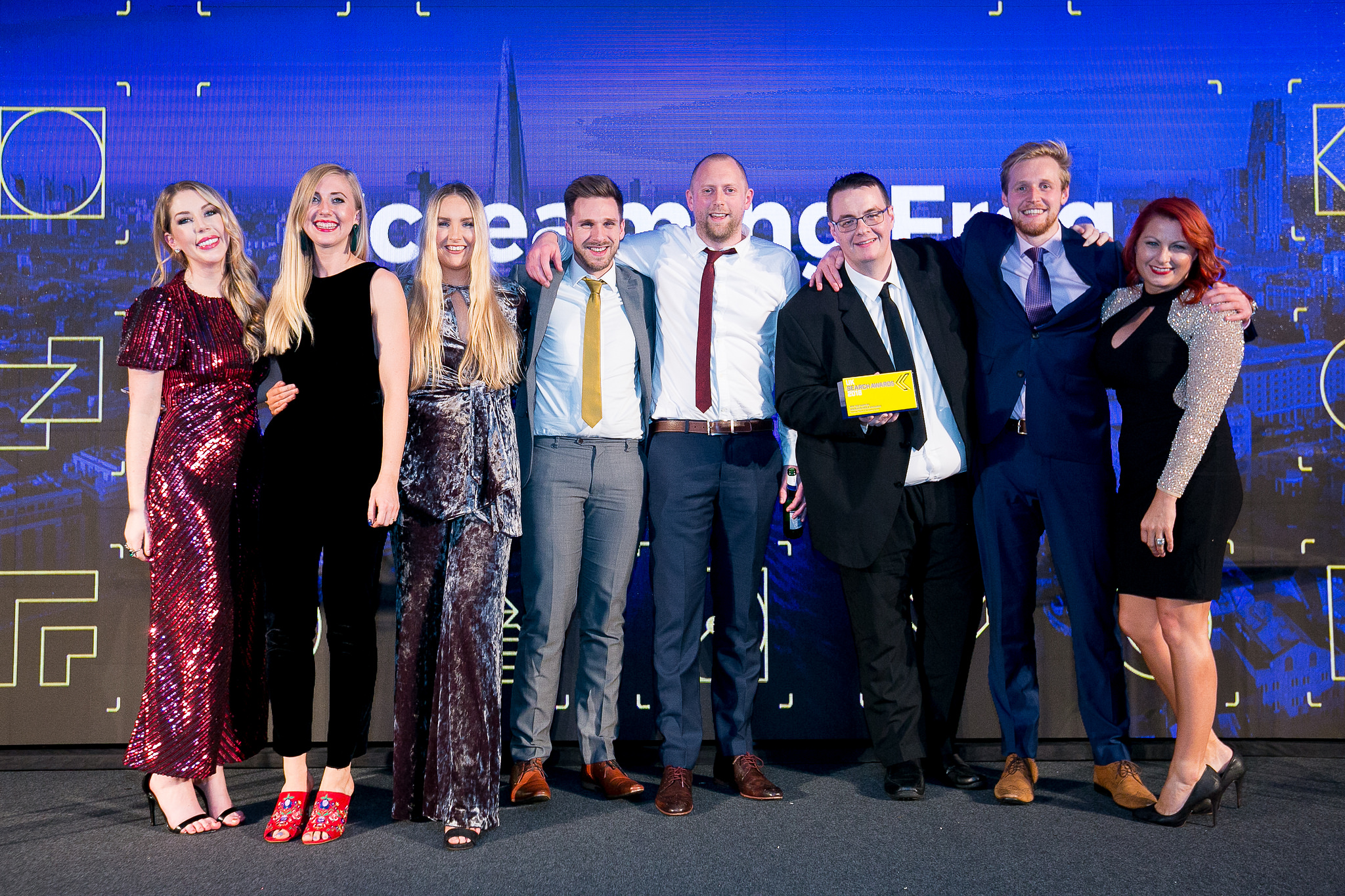 …And took home the prestigious award of “Best SEO Campaign” for our client Spotahome, a testament to the fantastic work put in by everyone at the company.

A fantastic evening to round off a brilliant year.

We’re always looking to support charities that mean a lot to the people that work at Screaming Frog and if they involve eating copious amount of cakes, muffins, and brownies then that’s just what we’ll have to do!

Over £200 raised toward a great cause, but some tell-tale signs that not everybody was upfront about what they made themselves…! 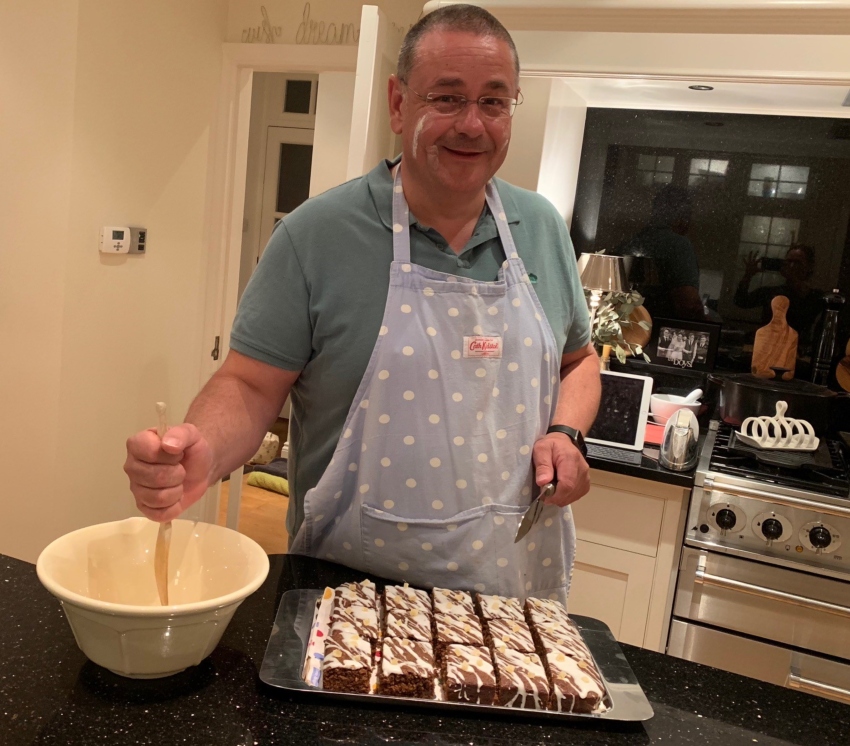 A further £250 was raised from another cake sale earlier in the year, with Aaron insisting he hasn’t been part-timing as a baker whilst taking the title for the best bake. 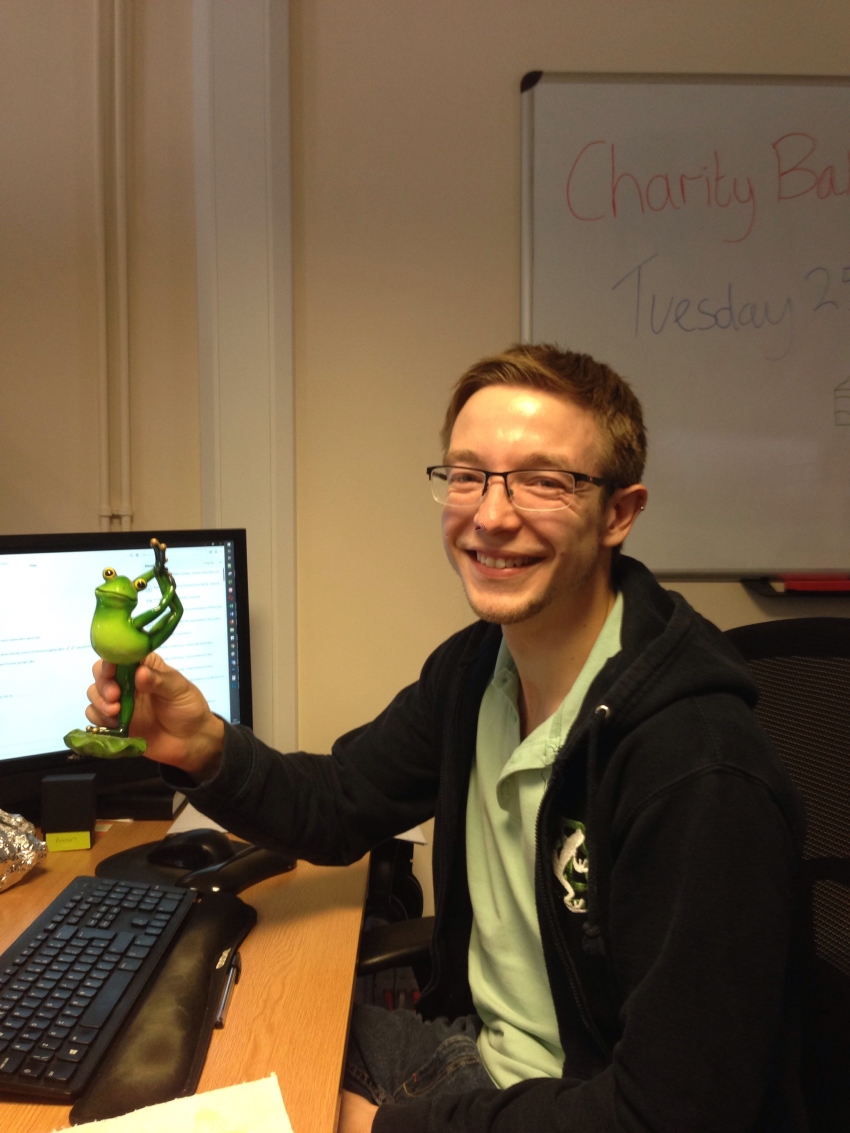 Despite what our our robots.txt might suggest we care about all animals in the Anura order! Which is why we helped to support a local team protecting toads from local traffic. 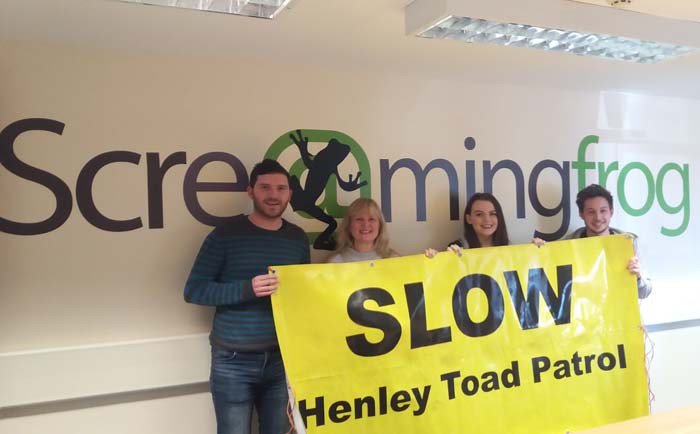 To make sure we’re safe both in and out of the office, a number of the team received First Aid training. So, if you spot us at a conference you know you’re in safe hands… despite what the below might suggest! 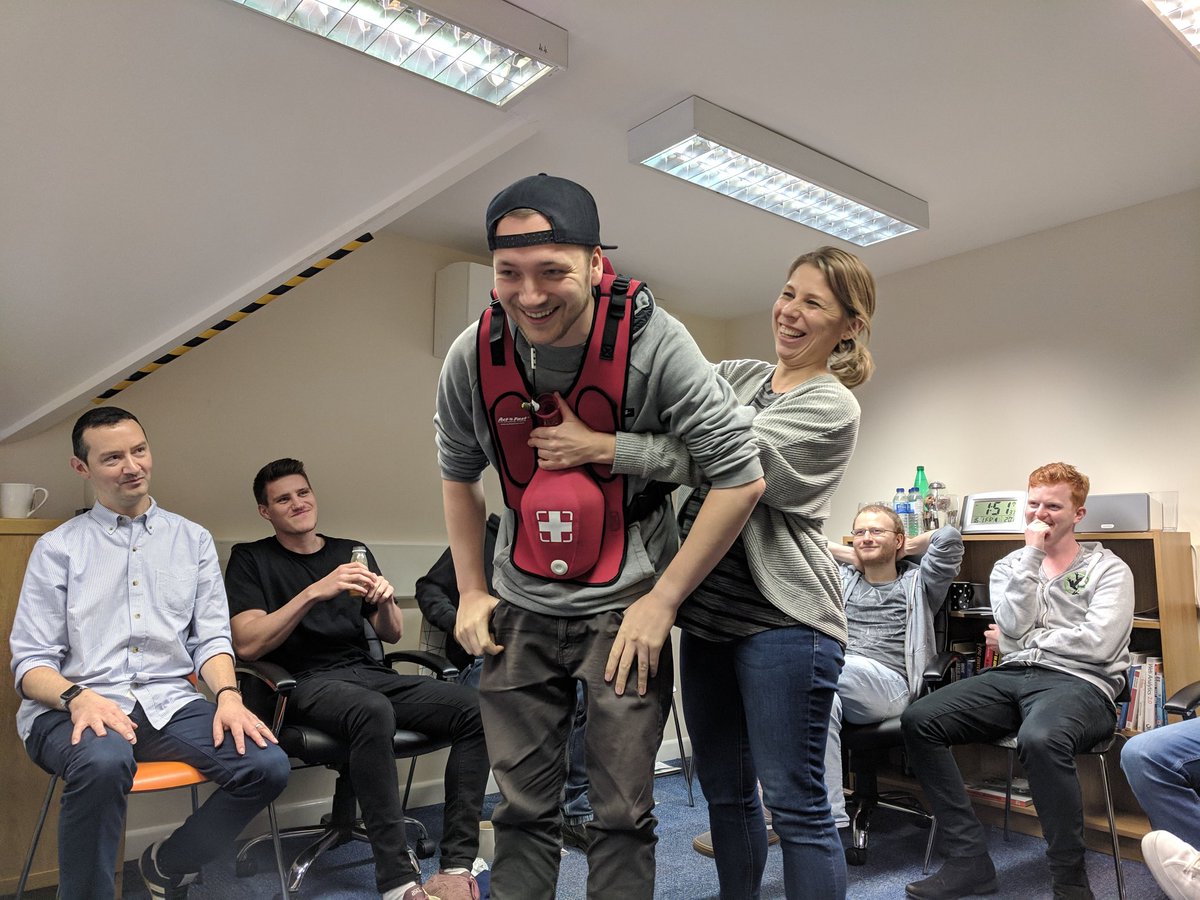 Throughout the year many of the team have taken part in sports events, particularly of the endurance running kind. A better person would ignore the tempting comparison between a grueling slog with the end never quite coming into sight as your endurance ever more depletes, and that of running a marathon. I am apparently not that person.

The Screaming Frog team took to the pavements en-masse as a weekly Run Club was set up to train for Reading Half Marathon. Under the expert guidance of Coach Euan Brock the team was fit and raring to go. Unfortunately, the weather was not. With heavy snow the night before the race, the event was cancelled and Run Club never got to put training into action. Some were more savvy about this than others… 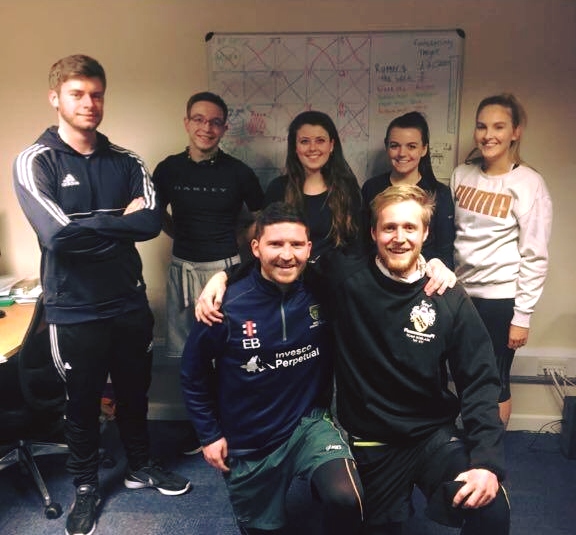 And how could we show our faces in our town of residence, Henley-on-Thames, unless a member of the team also took on the hilly half-marathon here! Our Office Manager Ewa took up the mantle and smashed the course with such running prowess that she has become the official new coach of Run-Club.

Undeterred by the Reading setback Coach Brock and I set our sights to warmer months and a longer distance, running the Paris Marathon in April beside a strong support team from a cohort of Screaming Frog employees past and present. The pictures below represent the reality of the event  versus how we describe it to other people. 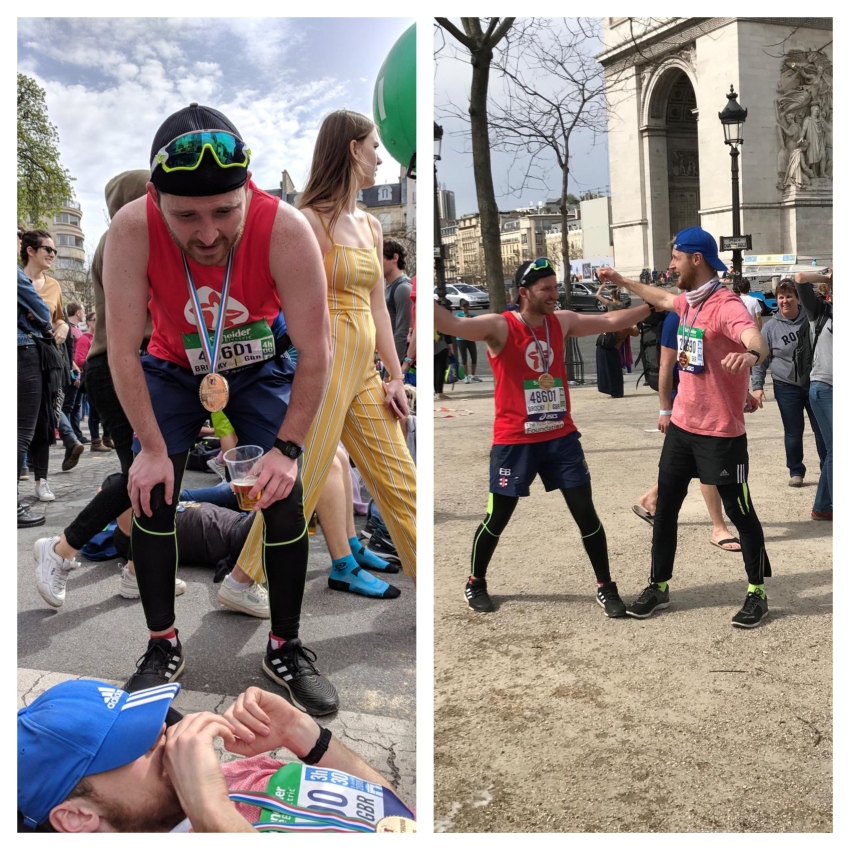 Most people would run for the hills if asked to step into the octagon for an MMA fight, but our Digital Designer Mike is not one of them. He stepped up for 3 months intensive MMA training culminating in a fight night to raise money for charity. He insists this wasn’t just a way to take out his frustrations about the SEO team asking yet again for “just a few more changes”.

We don’t just play to Google’s tune. Among our search specialists, we also have a variety of talented musicians that this year took to the stage. Our Head of SEO Pat Langridge, guitarist for Reading-based Las Nova caught here performing Ricky Gervais’ Free Love Freeway, was so accomplished that they even caught the attention of the man himself on Twitter. 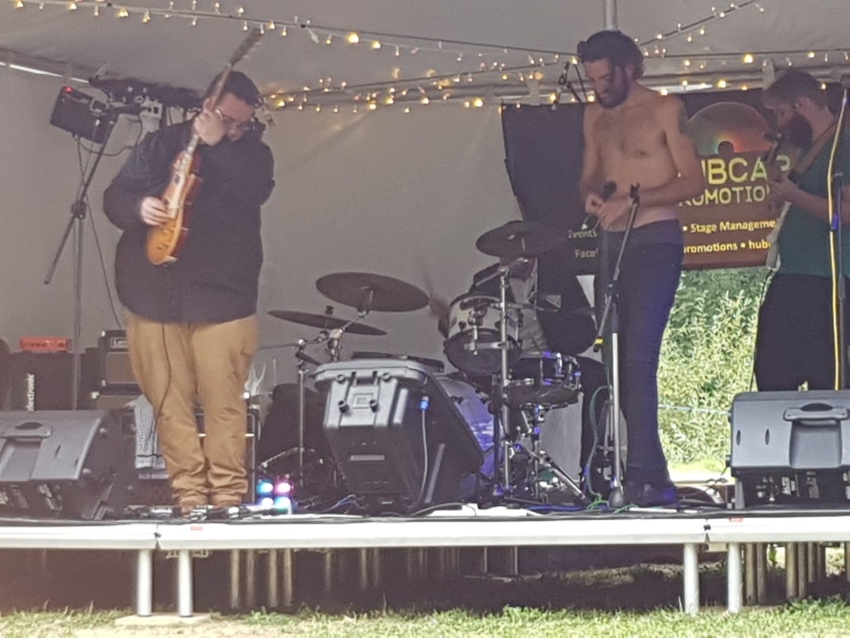 Not to be outdone, James McCrea, formerly touring worldwide on a cruise-ship before switching to the rockstyle lifestyle at Screaming Frog, hit up Oakford Social Club as the guitarist of Nobodies Birthday. 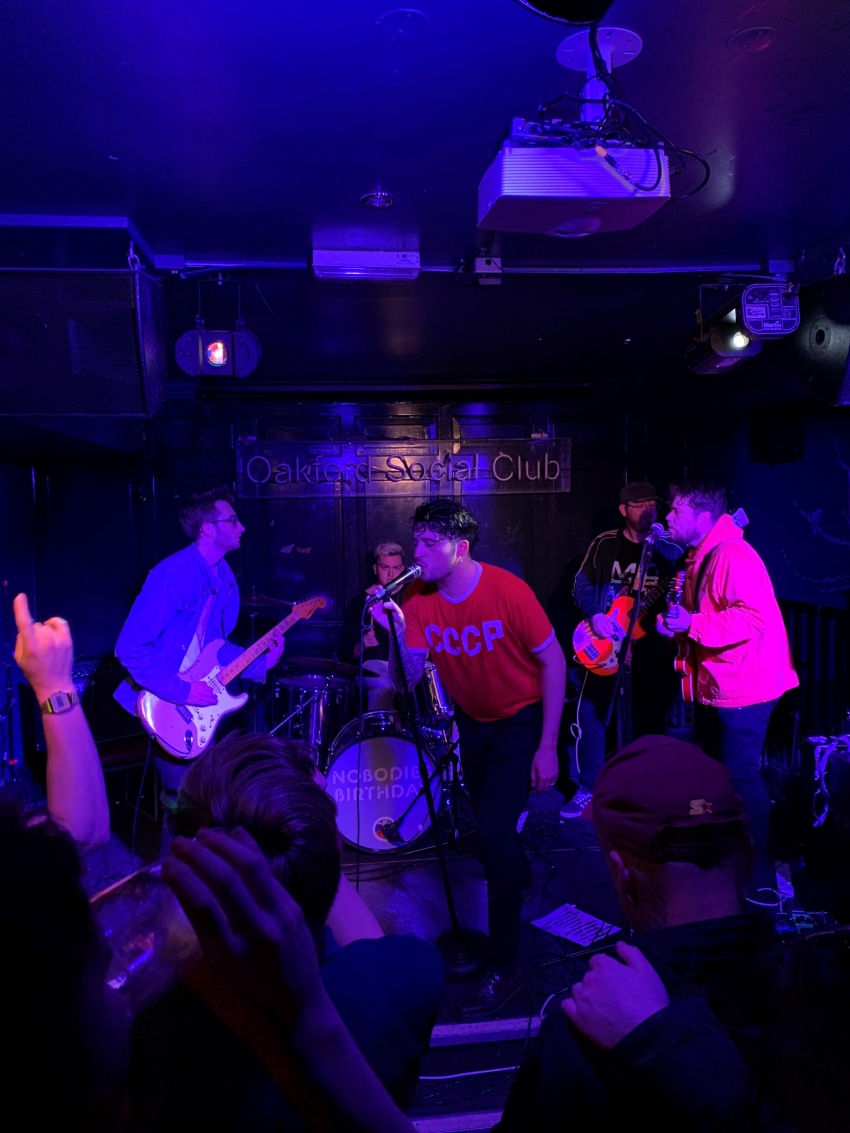 But we don’t just limit ourselves to the more traditional instruments. Faisal headed over to Austria to perform his own brand of electronic music which he describes as:

“One Hand Clap, a part generative performance piece that analysed player controller data and the spectromorphology of acousmatic soundtracks to generate it’s own soundscape.”

An impressive feat, but we’ll stick with techno…

You don’t need an instrument to hit the airwaves. Sam, one of the dev superstars working on the SEO Spider, has been working on Spinnerproof – a podcast dedicated to Robot Wars coverage among other things. If his robot making skills half as good as his dev skills, we’re all in serious trouble!

Heading out as an Army

A group of frogs is known as an army, which feels rather appropriate for when the team step out into the wider world on a company social.

The normally sleepy, quaint town of Henley-on-Thames in which we are based becomes a bustling hive of boats, visitors, and 7 ft rowers during the regatta season. Never wanting to be left out, our summer social now happily coincides with the regatta. This year was beautifully sunny and hot, so we headed down to the river armed en-masse with suncream and shades. 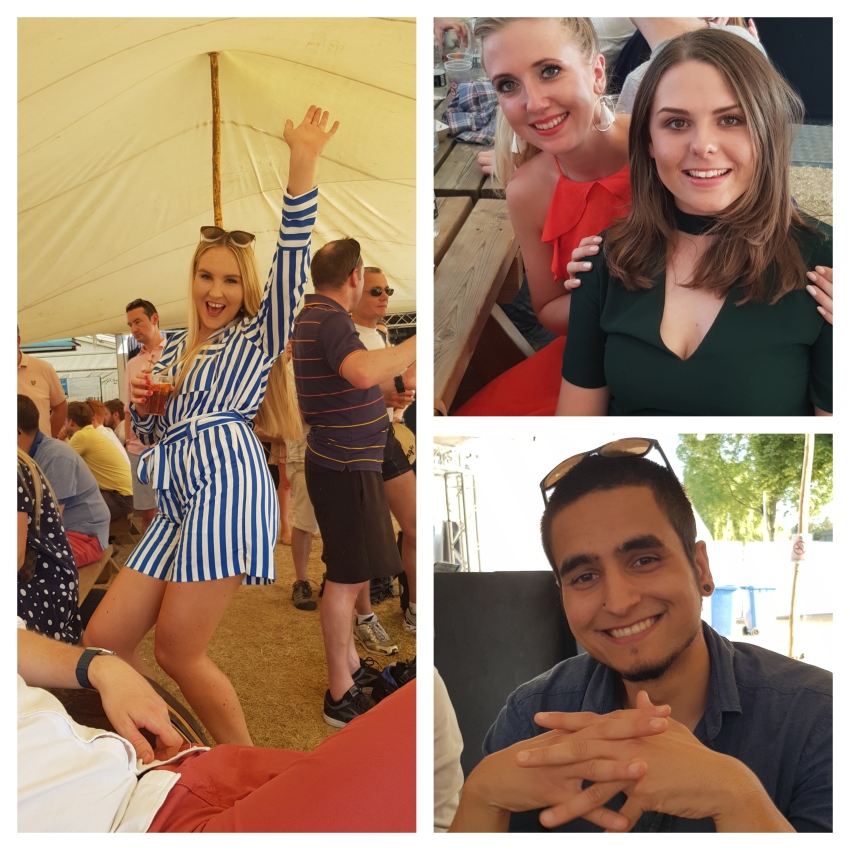 We embrace all cultures at Screaming Frog, so felt it our duty to support the German tradition of Oktoberfest, which has become a yearly occurrence. Although Bavaria is admittedly a long way from our meeting point in nearby Reading, a great stein was had by all that attended. 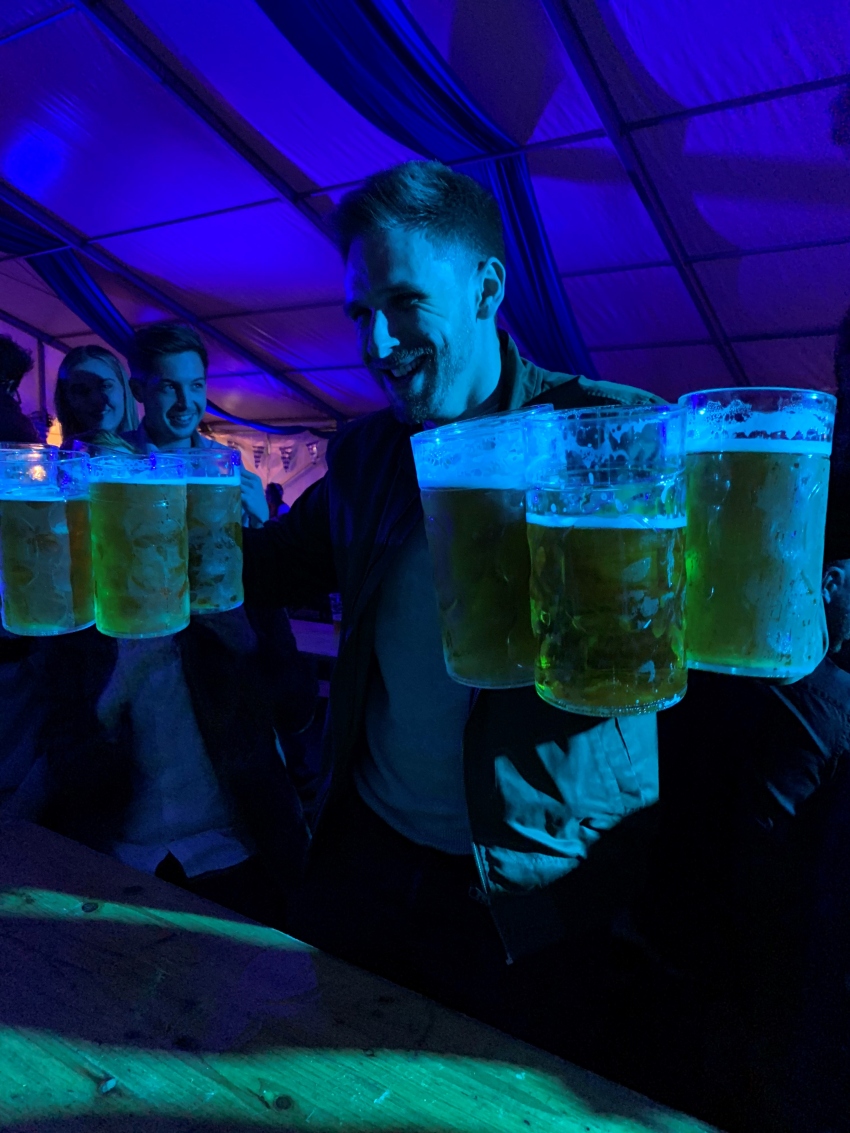 Whilst being outside of London has made us very familiar with the Henley train branch line and the Twyford to Paddington route, which stops at every conceivable location South of London, it also offer some lovely views and friendly faces, which we like to take advantage of. 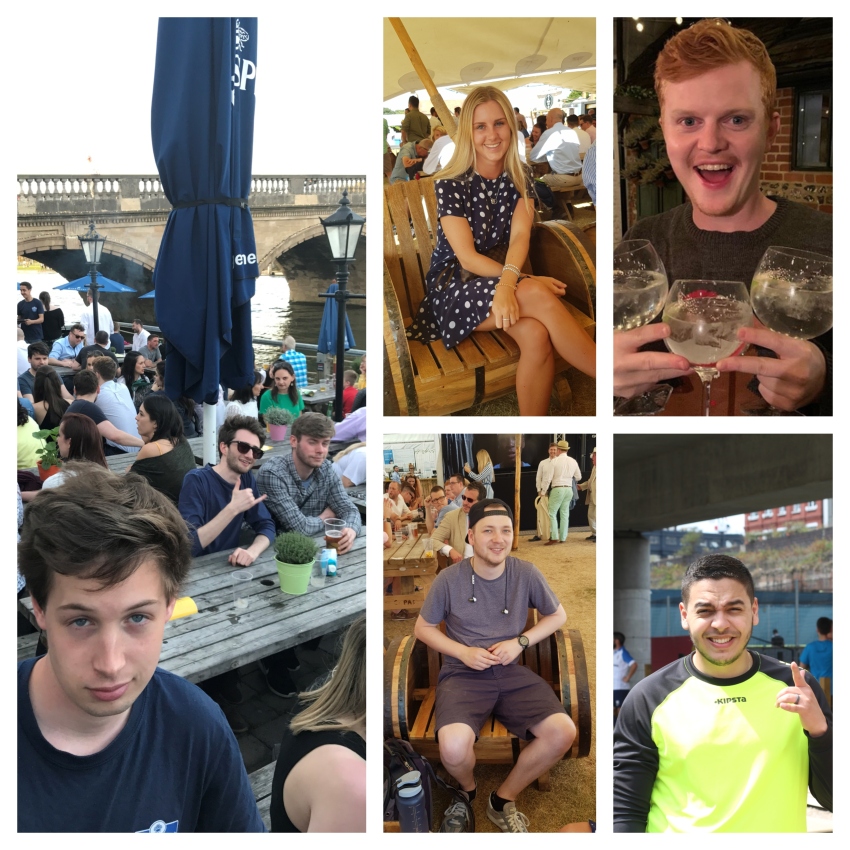 This year we’ve hit the town to enjoy some wine and cheese, and quenched our thirst riverside in the Summer evenings for work socials.

Would any workplace be complete without an office Christmas party? We maintained the yearly tradition of heading into town for some pool, darts and fun, before the office Secret Santa and heading to the local pub for a 3 course dinner – Merry Christmas! 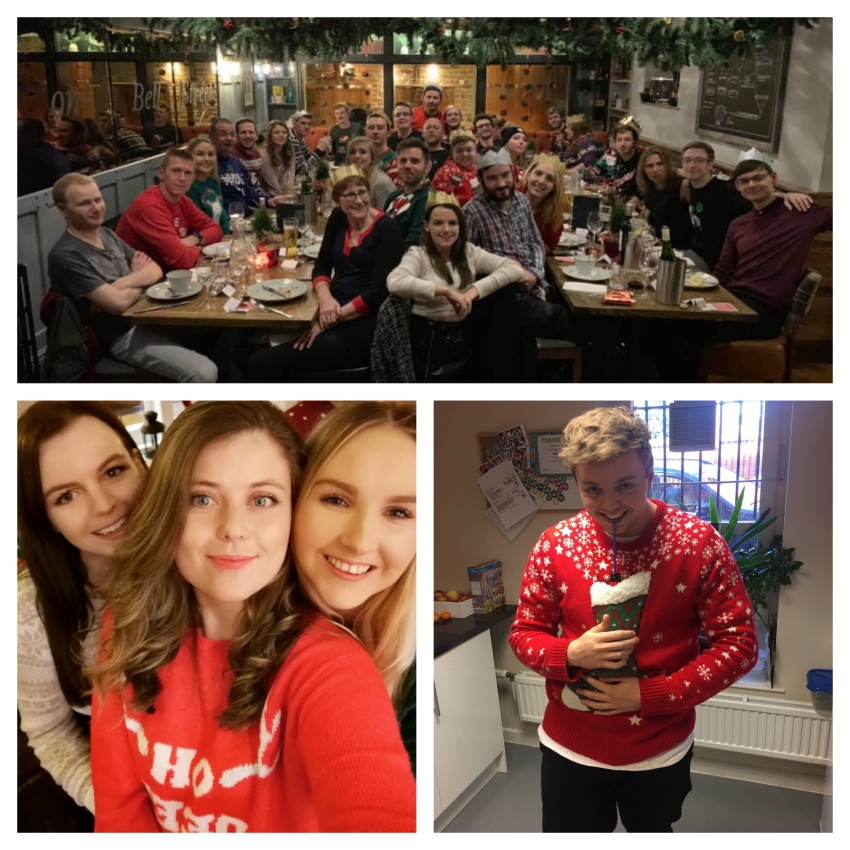 If you read this far, you may be wondering how we fit in being a pioneering SEO crawler and award winning SEO team (told you the bragging would be in here).

Well we couldn’t have beers and bakeoffs without our bread and butter of SEO. We’re proud of the work we do with our clients, (including the piece that won a UK Search Award, have we mentioned that?).

Come and work for us!

We’ve welcomed a whole host of new team members to Screaming Frog this year and we’re still on the look out for more.

This post wasn’t a thinly veiled attempt at convincing you to join (promise), but if you like what you see, check out what we’ve got to offer! 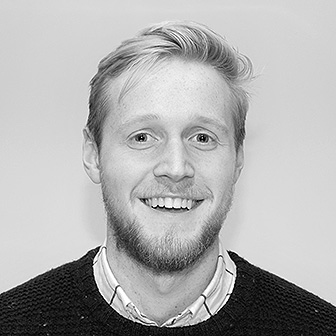 Daniel Cartland
Having graduated with a degree in Neuroscience, Daniel decided the obvious next step was something completely different and soon found himself at Screaming Frog in the weird and wonderful world of SEO. Despite insisting that his (patchy) knowledge of the brain means that he knows exactly what Google are thinking, he still did not have the foresight to support a football team more adept at winning than QPR.