For a digital industry there’s much to be said for how much we all love an in-person lecture. Maybe it’s a collective longing for those rosy university days, or perhaps it’s just the buzz (and the beer) found at many of our favourite industry events.

Seemingly though, if you want to become a big SEO star with lots of Twitter followers, you’re going to have to crack open a PowerPoint eventually.

While there are great opportunities out there for people to test the waters, and also opportunities to get abducted in a weird basement, Dan Cartland and myself jumped in the deep end a few weeks back and ran our very own SEO talk evening. We were the only speakers at our hour-long event, so I guess that now makes us keynote speakers, too.

A few months back the two most Henley-on-Thames sounding organisations were introduced when Screaming Frog were approached by The Creative Duck. The Ducks are a group of highly motivated creative business people from Henley who put on events to help inspire local small businesses and entrepreneurs.

They promised us a swanky hotel function room, beer, and an audience of around sixty; and asked us if we could discuss ‘SEO Essentials’ with their paddling. We kindly agreed. Little did they know, we had 0 experience talking to large groups of people. Whoops.

Thank you @screamingfrog for the insightful SEO talk tonight @HotelduVinbrand in Henley with the Creative Duck Collective…as you can see here, even you were deep in backlink chat 😂🙏 pic.twitter.com/fhVNu7JbHL

If you’ve not got enough Twitter followers and you’re thinking about presenting on stage in the near future, I’ve done it once, so here are some things to note which might help:

SEO is weird. It’s the challenge of encouraging an elusive computer algorithm to promote whatever you’re trying to flog. Every SEO’s Grandma thinks we work at Google and that’s just something we all must just accept.

Therefore, it’s okay to demonstrate to both industry and non-industry audiences just how bizarre the whole situation is. Opening up about the existential novelty of how removed we are from the factory floor shows an element of humanity- something that everyone can appreciate.

Dan (bless him) took on the challenge of summarising technical SEO in the space of 15 minutes. That’s like trying to cram half a dozen keywords into one page title. Not gonna happen. Instead of talking at length about how to implement 301 redirects or hreflang, he listed the different on-page elements that could potentially be an issue, and how to check on them.

Talks should be about explaining concepts and presenting ideas. Nobody sits in the BrightonSEO main hall mashing out local links on their laptop while trying to keep pace with Greg Gifford’s insanely high-paced rhetoric about church blogs and cult films. What people want from a talk is information about a thing they don’t yet know about, and where to go to learn more about said thing- not a step by step in-depth tutorial.

Another way to do things is to have fourteen slides, and cycle through them quickly. This way the audience cannot get fatigued looking at the same slide for too long, and you can replace all that text with amusing images. Win win.

This doesn’t work with every talk and every audience, but it’s always good to maintain momentum, especially when you’re explaining complicated things like the value of links.

The Real Talking Starts After the Talk

We’d been warned before the talk not to be offended if there weren’t any questions. There were more than we had time for in the end. If you’ve ever fed ducks in the park, it was a bit like that, except replace the bread with hints on how to structure the hierarchy of your internal linking.

If we all took talks at face value we’d all just regurgitate Whiteboard Friday til SEO (finally) died. The real value in doing a scripted piece to the room is then being able to interact and debate with the audience afterwards.

One of the amazing parts of the SEO industry is how everything is always changing- each algorithm update brings new challenges, and not even Google know how their crazy RankBrain ranking AI thingy works. Hence, we need discussion to fuel innovation.

We had lots to talk about afterwards in the bar, and it’ll be the same wherever you speak. Even Whiteboard Friday has a comments section, and this is always the most interesting bit!

Did it take lots of work to get my talk right? Yes. Did I practice it enough? No. Would I do it again? Certainly, I’ve gotta get more Twitter followers somehow.
Oh, and if you want to learn about what SEO is, you can catch us on the Facebook Live video 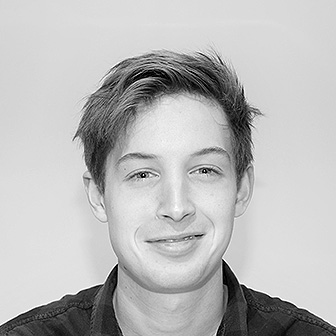 Oliver Brett
Oliver is a SEO Manager at Frog HQ. He loves creating fun content, solving technical problems, and the camera whenever the Frog Blog needs someone to model giveaway swag.