What Should You Do If You Receive a Google Brand Penalty?

What Should You Do If You Receive a Google Brand Penalty?

Google have been handing out penalties and manual actions to websites for some time now, but lately we’ve seen an increasing number of cases of brands being nailed and getting wiped from the SERPs for even branded search terms. There have been some big brands in both the UK and US that have been hit in this way lately, amongst others Music Magpie (in the UK): 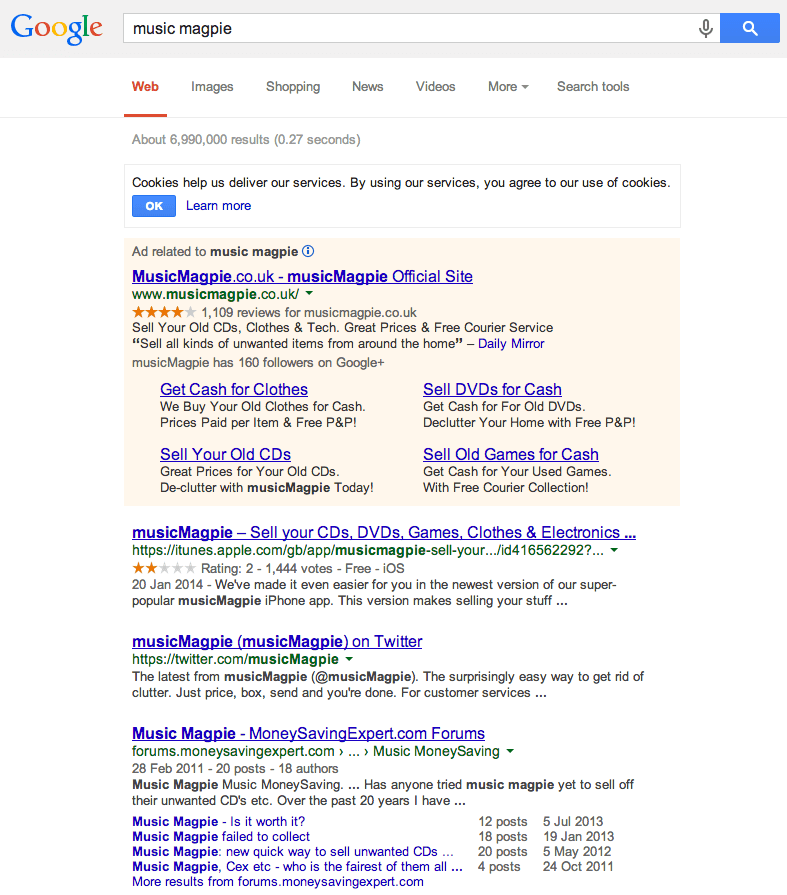 And Overnight Prints (in the US): 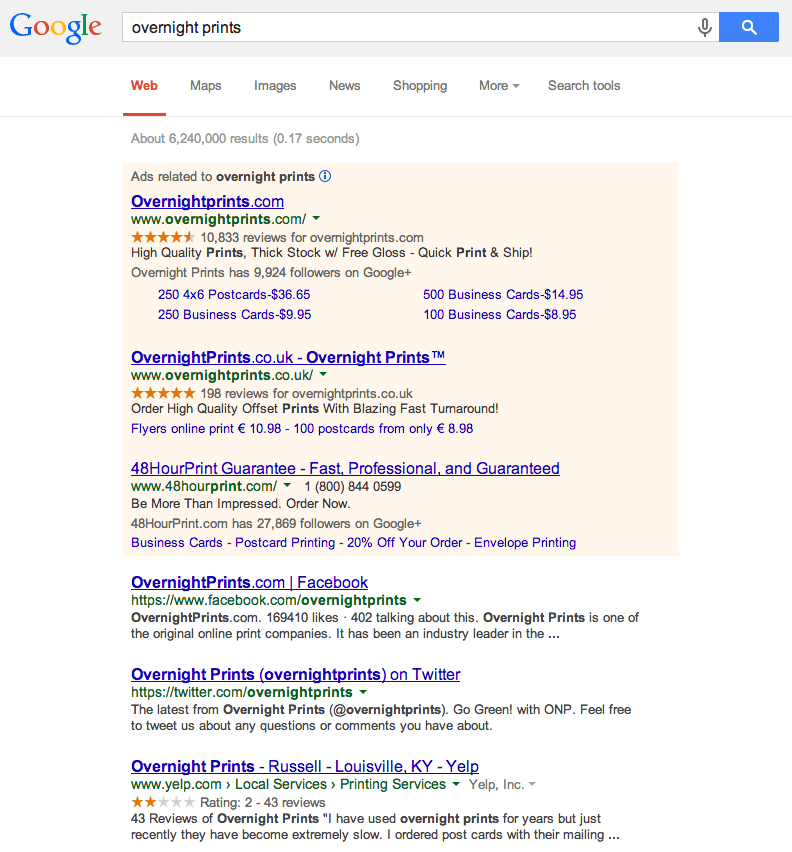 Law firm Irwin Mitchell are another who have been wiped out, and if you think the [irwin mitchell] SERP doesn’t look pretty for them, just take a look at this graph from Searchmetrics:

As an industry I think we act fast in spotting these issues and it’s great to see there’s been some in depth analysis and discussion on recent penalties over the last week or so. So what should you do if you, or a client are penalised by Google to the extent that you no longer appear for branded queries? We ourselves had an experience where an old client were penalised by mistake for selling links. Google don’t always get things right!

A penalty of any kind from Google can mean serious business and bottom line (Expedia will testify to this after their stock fell 3.9% following a recent hit) so it’s critical that brands and agencies know the steps to take, should the worst happen.

PPC – Bid On Your Brand

First things first; if you’re not already doing so, start bidding for your brand terms in AdWords. A lot of large brands are probably doing this anyway, but equally many businesses don’t run much (or any) paid search so this should be the first thing you do to ensure your brand stays visible to users. 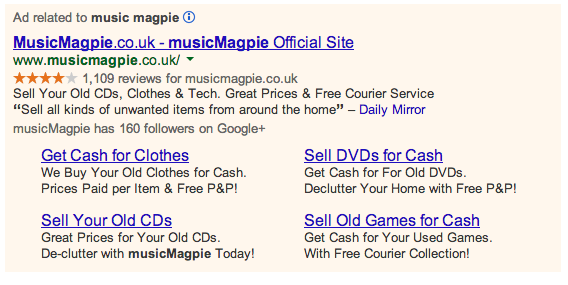 Odd isn’t it, that you can get banned from organic search, but Google are still fine with you appearing if you pay for it? :)

I kid I kid, but Music Magpie are making good use of ad extensions to take up as much real estate as possible, which is another smart move. Let’s not forget that most average web users are unaware of the intricacies behind how pages are ranked, so give them the best possible chance of finding your website – even if you’re having to pay for those clicks! 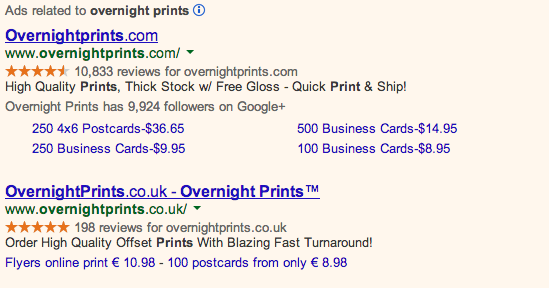 Overnight Prints are not currently ranking for their brand in the US, so they have cleverly used their .co.uk domain to take up additional real estate above the fold. Even though the .co.uk isn’t relevant to the US audience, Overnight Prints have taken the decision to bid on the same branded key phrase with their UK site in an attempt to catch as much of their branded traffic as possible. Technically speaking they are in danger of breaking AdWords’ double serving policy, but as they’re bidding on their own brand and have no paid competition, it’s unlikely that anyone will complain.

As touched upon earlier, the SEO industry is usually very sharp at spotting companies who have had penalties and are having ranking issues (great tools like Searchmetrics help, too). Whether you work client or agency side, chances are someone you know may have an issue like this at some point from something you, they or someone has done in the past, and it’s likely you’ll have a choice to make as to how to handle any questions or blog posts that come up.

For example, following their recent loss of organic visibility Expedia.com have kept completely schtum about any problems they’re facing – even ex-Inbound Marketing Director Martin MacDonald has kept his powder dry (FYI, MM worked in the B2B division at Expedia so wasn’t involved in their current predicament, I hasten to add!). A public slagging and outing match never achieves much or ends well, and only serves as an opportunity to make ill judged and potentially libellous statements.

Above all, if you come out public, plead innocence and tell Matt Cutts and the Google webspam team that they’ve got it all wrong (or the old “look what X, Y and Z are doing, they’re much worse than us” excuse), it’s not going to make any difference.

Irwin Mitchell decided to release a short and clean statement in the wake of their penalty (“We are aware of the situation and are working closely with our digital agency to deal with it.”), while French ‘link network’ (as they’ve been described) Buzzea went the other way and branded Google’s penalisation of their site as ‘abusive’ in a long statement (here, en Français). Get on Matt Cutts’ radar at your peril. 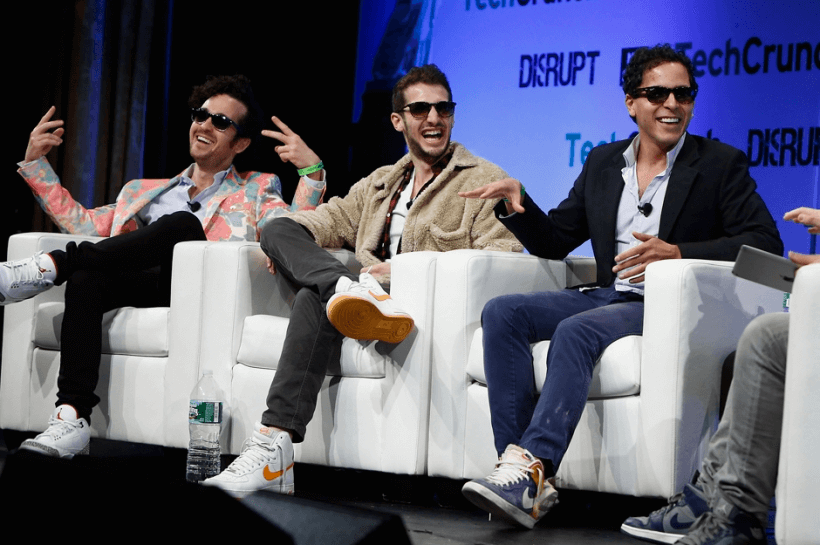 And what of those three humble and modest co-founders of Rap Genius (sorry, I really have a thing about people who wear sunglasses indoors), who were ‘destroyed by Google’ in December 2013? They decided to release a remarkably honest and frank statement/apology, and pledged to clean up their act and stick to Google’s guidelines. While Rap Genius now rank for their brand again, it appears recovery has only been partial:

Whatever approach your company decides to take; make it early, stick to it and move on to more actionable points quickly.

Similar to how Overnight Prints are leveraging their other properties in paid search, companies have the opportunity to maximise other websites they own, blogs or domains in organic, too. 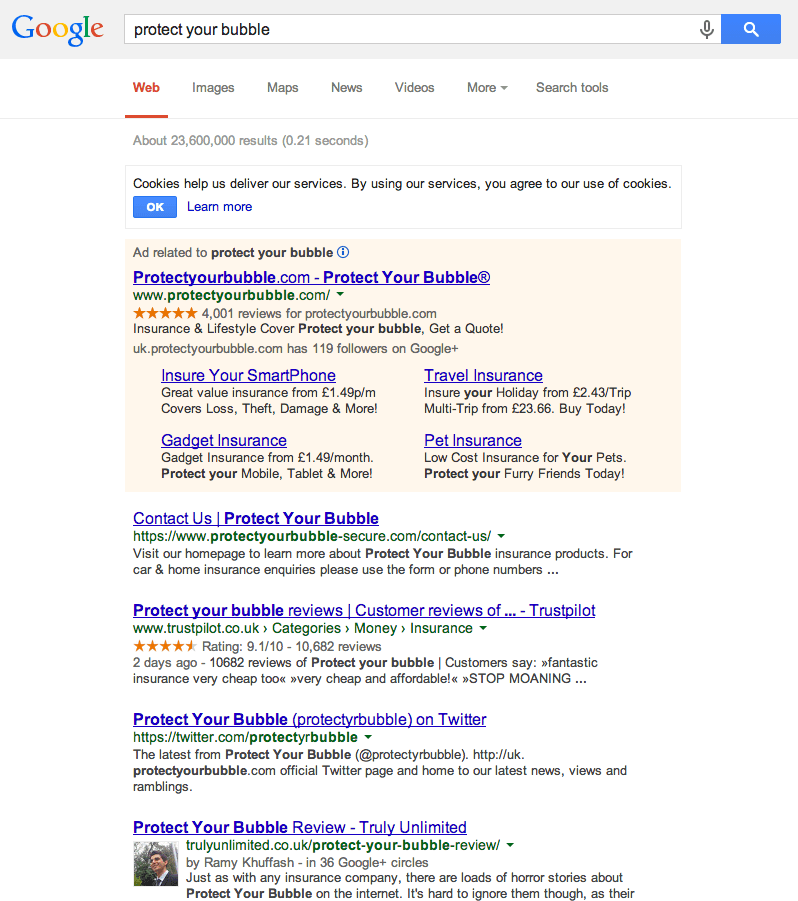 Insurance company Protect Your Bubble have been victim of a brand penalty, yet they have had the blow softened by their separate secure domain ranking in 1st position – “https://www.protectyourbubble-secure.com”. This is a separate secure domain which they use to fulfil their quotes (notice how the ‘next’ button here links to it – “http://uk.protectyourbubble.com/home-insurance/”). I believe what happened was, Google dropped their main domain and then ranked this domain in its place as the next most relevant as they link to it internally. This was probably more by luck than judgement and I suspect they never really wanted it indexed – if you check their robots.txt, they have a disallow – “https://www.protectyourbubble-secure.com/robots.txt”.

But the point remains, it’s still useful to have another domain that may rank if your core domain gets nuked. Google brand penalties don’t usually last for lengthy periods (Google’s own guidelines pledge to deliver the best search results to their users, so they can’t ban you ranking for your brand for too long!), but a quick way to try and catch that organic traffic is to utilise other branded domains you own. You know that seemingly pointless long list of random domains you’re company has bought over the years? Perhaps it’s time to put them to good use or have one as back up if an issue ever rose in the future.

As well as bidding on your brand, consider in the short term spending more budget on PPC and reassigning marketing spend on other channels to pick up the slack of your missing organic traffic. If and when it makes sense for your brand, be agile and try some of the following; test some sponsored social activity, run some additional display ads, create a dedicated promotional sale in your email newsletter, accelerate your content plans to increase activity and engagement with your community. SEO and organic should never be operating in a silo, so at this difficult time it’ll be up to your other marketing channels to improve performance to help compensate – for this they’ll need additional budget and resource.

Agile marketing shouldn’t be constrained to being reactive in the face of a Google penalty – my buddies at Rap Genius have made moves lately to become less reliant on Google by launching a new app. At the very least, it got them some nice links.

Claiming your brand’s’ social profiles should not only be a priority when you launch a business, but I’d even argue it should be contingent on selecting a brand name in the first place. Doing so is best practice for lots of reasons, not least in order to dominate the first page of search results for your brand. Moz are an example of a company who have done this well: 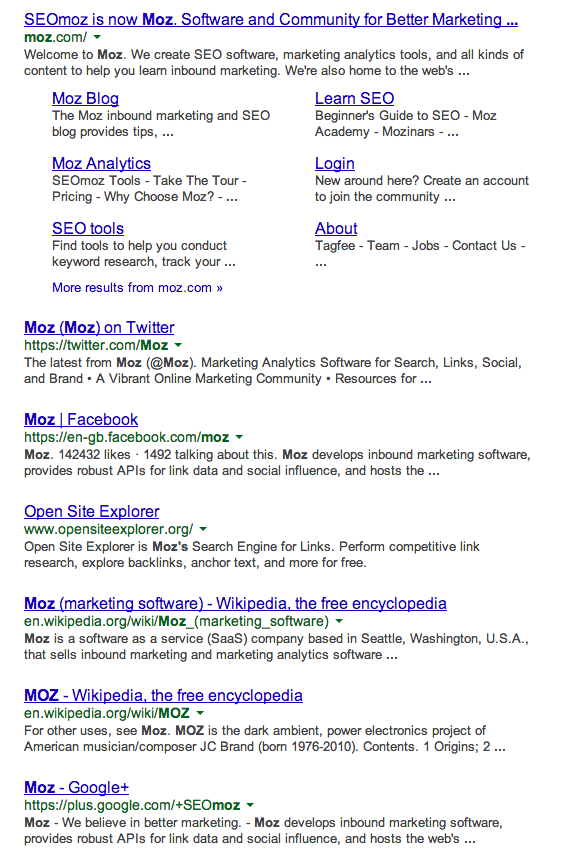 Just one of the page 1 results is unrelated to Moz the marketing software company.

The importance of reputation management is underlined during a brand penalty as your main site is removed from the SERPs (so you’re already 1 result down!), and can often be compounded when others pick up on the penalty and start writing about it. This is what currently ranks 3rd for [irwin mitchell]:

Not exactly a great trust signal from a user’s POV, is it. In fact for the really high profile Google penalties, a lot of bloggers and mainstream media will commentate on the event and what Google are doing, solely to try and pick up on the site in questions’ branded search traffic (spotted, Rand). 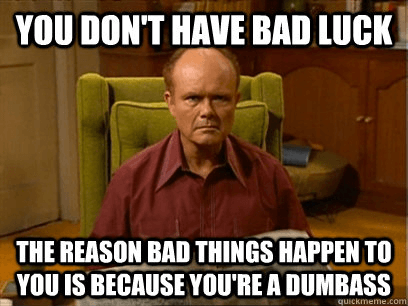 This blog post was never intended to be a self-righteous lecture on how you should do SEO, or a judgement on others who are pushing the limits on what Google approves of (which is nothing anymore, apparently) vs what works, because I get it, everyone has the odd skeleton in the closet and has had cut corners here and there at somepoint.

From experience brand penalties of the kind outlined above are almost always link related these days. Sure, it can be onsite issues in some cases, but right now, Google are gunning for links. If you’ve suffered from this kind of penalty, a thorough link audit is generally in order to clean up and ensure you’re within Google’s own guidelines.

There are many who have outlined the link audit (and removal/reconsideration/disavow) process more thoroughly and eloquently than I can articulate (here are some good resources), but anyone who has ever spent time undertaking a link audit will know it’s a very manual and time consuming process – if you’re doing it right. I would recommend pausing any other SEO work and focusing your time on tackling what can be a mammoth but crucial task.

That about wraps things up. We’ve seen even more big brands getting hit with big drops in visibility over the last week (Halifax, uSwitch, William Hill and Dialaphone) as Google continues to flex its muscles. It’ll be interesting to see if any of these new ranking punishments develop into brand penalties over the next few weeks… 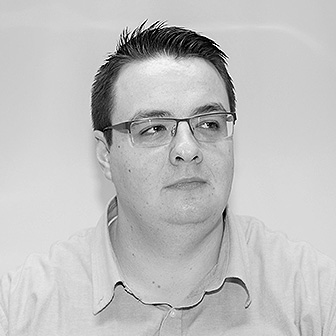