I am really pleased to announce version 2.30 of the Screaming Frog SEO spider code-named ‘Weckl’. This update includes new features that provide greater control of crawls, as well as how the data is analysed. Thanks again to everyone for their continued feedback, suggestions and support.

We still have lots of features currently in development and planned on our roadmap, so we expect to make another release fairly soon. For now, version 2.30 of the SEO Spider includes the following –

Back in 2012 Google changed the way they display snippets in their search results. Historically this was simply a character limit of around 70 characters for page titles and 156 characters for meta descriptions. However, Google switched this to determine the actual pixel width of the characters used, which we believe is currently a limit of 512 pixels for page titles which they truncate with CSS. You may expect meta descriptions to be simply double this 512px div figure (1,024px), however they appear to be approximately 920 pixel width.

Page titles or meta descriptions with lots of thin characters (such as ‘i’ or ‘l’ etc) can have more characters than the old set limit. Conversely, if particularly wide characters are used, Google can show far less than the old limits. I believe the first experiments around this behaviour at the time were from Darren Slatten, who had already built a very cool SERP Snippet tool long before.

You can read more about our analysis, emulator logic and caveats for this in our page title and meta description pixel width explanation post as it’s an interesting (!) discussion.

We have also introduced a ‘SERP snippet’ emulator into the lower window tabs, which will show you how a page (when selected in the top window pane) might look in the Google search results based upon the pixel width logic described above.

The emulator provides detail on the width in pixels and how many pixels a title or description is over or under the limit. Please note, this won’t always be exact and it is our first iteration. This feature will be developed over time to include much more (like dates, item counts, rich snippets etc.), based upon the ever changing search results of Google (and possibly even other search engines).

We have introduced a ‘preferences’ tab into the spider configuration which puts you in control over the character (and pixel width) limits and therefore filters for things like URLs, page titles, meta descriptions, headings, image alt text and image size. 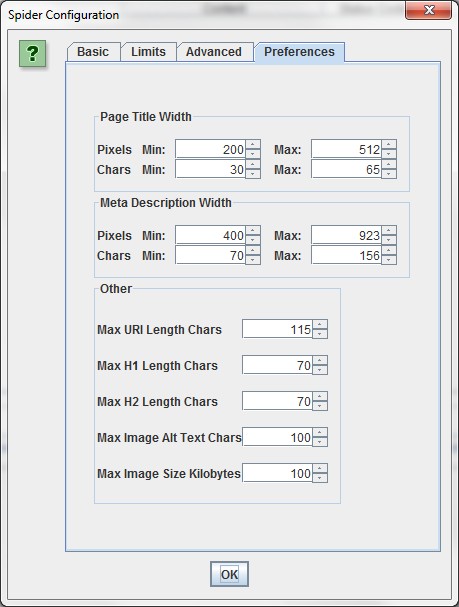 So if you have performed your own research, or wish to amend the limits and filters in the interface, you can.

The SEO Spider now crawls canonicals whereas previously the tool merely reported them. Now if a URL has not already been discovered, the URL will be added to the queue and they will be crawled as a search bot would do.

Canonicals are not counted as ‘In Links’ (in the lower window tab) as they are not links in a traditional sense. Hence, if a URL does not have any ‘In Links’ in the crawl, it might well be due to discovery from a canonical. We recommend using the ‘Crawl Path Report‘ to show how the page was discovered, which will show the full path and whether it was via a canonical.

We have moved a few options into a ‘limits’ tab under the spider configuration and introduced new options such as limiting crawl by maximum URL length, maximum folder depth and by the number of parameter query strings. 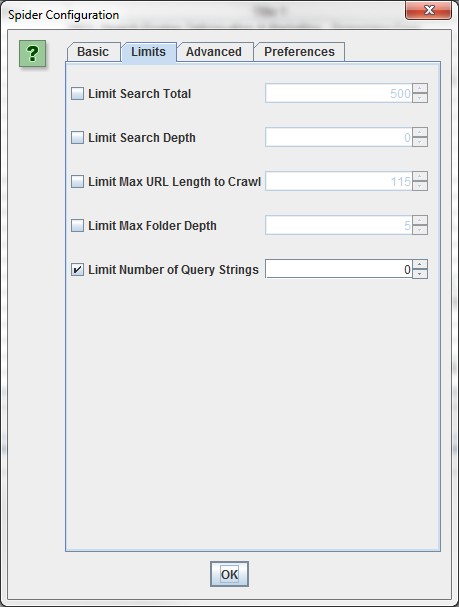 I have been asked for a regex to exclude crawling of all parameters in a URL a lot over the past 6-months (it’s .*\?.* by the way), so this will mean users don’t have to brush up on regex to use the exclude function for query parameters. The new ‘limit number of query strings’ option can simply be set to ‘0’.

We added Excel support for .xlsx and .xls for both writing and reading (in list mode). 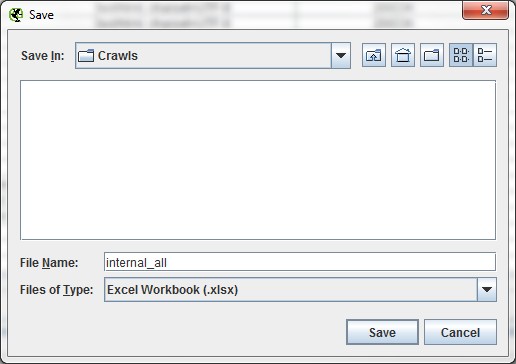 The SEO Spider will automatically remember your preferred file type.

We also made a number of other smaller updates, tweaks and bug fixes which include the following items –

As always, please just drop support an email if you discover any issues or have any problems. As mentioned above, we are working on another release fairly imminently, so any issues with the above can be quickly resolved.

Please do update your SEO Spider now to try out all the new features.