Our team have been busy in development working on exciting new features. In our last update, we released a new user interface, in this release we have a new and extremely powerful hybrid storage engine. Here’s what’s new.

The SEO Spider has traditionally used RAM to store data, which has enabled it to have some amazing advantages; helping to make it lightning fast, super flexible, and providing real-time data and reporting, filtering, sorting and search, during crawls.

However, storing data in memory also has downsides, notably crawling at scale. This is why version 9.0 now allows users to choose to save to disk in a database, which enables the SEO Spider to crawl at truly unprecedented scale for any desktop application while retaining the same, familiar real-time reporting and usability.

The default crawl limit is now set at 5 million URLs in the SEO Spider, but it isn’t a hard limit, the SEO Spider is capable of crawling significantly more (with the right hardware). Here are 10 million URLs crawled, of 26 million (with 15 million sat in the queue) for example.

We have a hate for pagination, so we made sure the SEO Spider is powerful enough to allow users to view data seamlessly still. For example, you can scroll through 8 million page titles, as if it was 800.

The reporting and filters are all instant as well, although sorting and searching at huge scale will take some time.

It’s important to remember that crawling remains a memory intensive process regardless of how data is stored. If data isn’t stored in RAM, then plenty of disk space will be required, with adequate RAM and ideally SSDs. So fairly powerful machines are still required, otherwise crawl speeds will be slower compared to RAM, as the bottleneck becomes the writing speed to disk. SSDs allow the SEO Spider to crawl at close to RAM speed and read the data instantly, even at huge scale.

By default, the SEO Spider will store data in RAM (‘memory storage mode’), but users can select to save to disk instead by choosing ‘database storage mode’, within the interface (via ‘Configuration > System > Storage), based upon their machine specifications and crawl requirements.

Users without an SSD, or are low on disk space and have lots of RAM, may prefer to continue to crawl in memory storage mode. While other users with SSDs might have a preference to just crawl using ‘database storage mode’ by default. The configurable storage allows users to dictate their experience, as both storage modes have advantages and disadvantages, depending on machine specifications and scenario.

Please see our guide on how to crawl very large websites for more detail on both storage modes.

The saved crawl format (.seospider files) are the same in both storage modes, so you are able to start a crawl in RAM, save, and resume the crawl at scale while saving to disk (and vice versa).

First of all, apologies for making everyone manually edit a .ini file to increase memory allocation for the last 8-years. You’re now able to set memory allocation within the application itself, which is a little more user-friendly. This can be set under ‘Configuration > System > Memory’. The SEO Spider will even communicate your physical memory installed on the system, and allow you to configure it quickly.

You can now choose to store both the raw HTML and rendered HTML to inspect the DOM (when in JavaScript rendering mode) and view them in the lower window ‘view source’ tab. 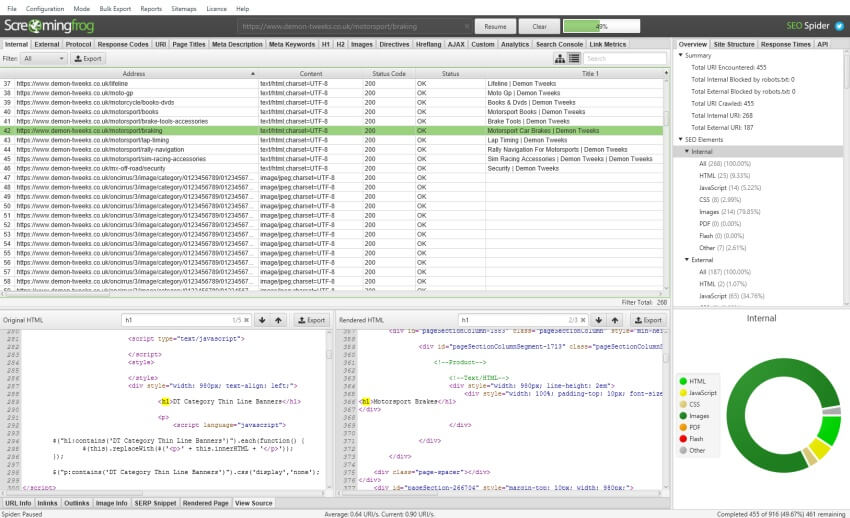 This is super useful for a variety of scenarios, such as debugging the differences between what is seen in a browser and in the SEO Spider (you shouldn’t need to use WireShark anymore), or just when analysing how JavaScript has been rendered, and whether certain elements are within the code.

You can view the original HTML and rendered HTML at the same time, to compare the differences, which can be particularly useful when elements are dynamically constructed by JavaScript.

You can turn this feature on under ‘Configuration > Spider > Advanced’ and ticking the appropriate ‘Store HTML’ & ‘Store Rendered HTML’ options, and also export all the HTML code by using the ‘Bulk Export > All Page Source’ top-level menu.

We have some additional features planned here, to help users identify the differences between the static and rendered HTML.

The SEO Spider already provided the ability to configure user-agent and Accept-Language headers, but now users are able to completely customise the HTTP header request. 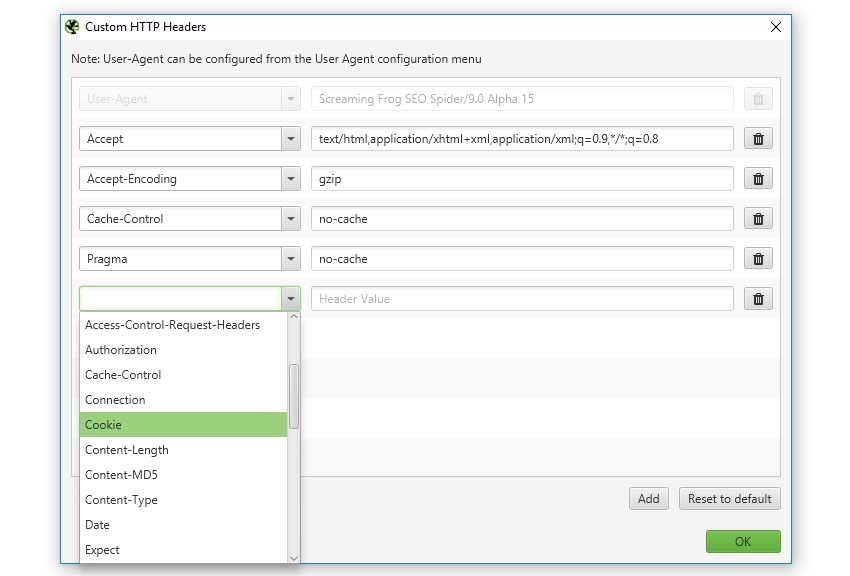 This means you’re able to set anything from the accept-encoding, cookie, referer, or just supplying any unique header name. This can be useful when simulating the use of cookies, cache control logic, testing behaviour of a referer, or other troubleshooting.

You’re now able to create XML Sitemaps with any response code, rather than just 200 ‘OK’ status pages. This allows flexibility to quickly create sitemaps for a variety of scenarios, such as for pages that don’t yet exist, that 301 to new URLs and you wish to force Google to re-crawl, or are a 404/410 and you want to remove quickly from the index.

If you have hreflang on the website set-up correctly, then you can also select to include hreflang within the XML Sitemap. 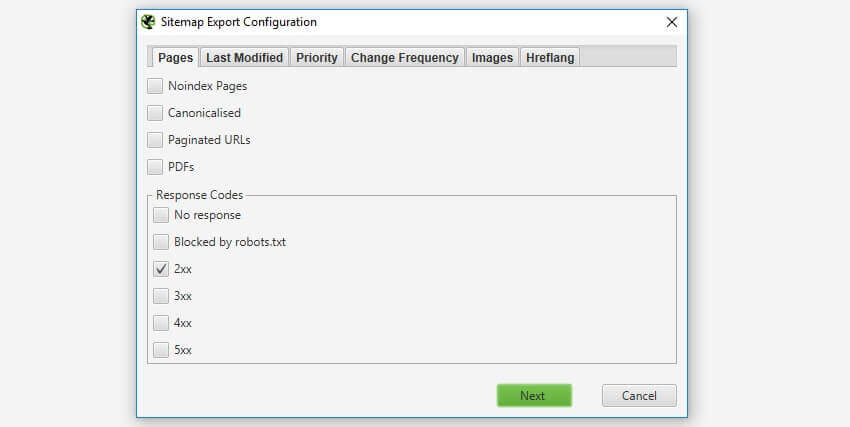 Please note – The SEO Spider can only create XML Sitemaps with hreflang if they are already present currently (as attributes or via the HTTP header). More to come here.

Previously when you performed a search in the SEO Spider it would search across all columns, which wasn’t configurable. The SEO Spider will now search against just the address (URL) column by default, and you’re able to select which columns to run the regex search against. 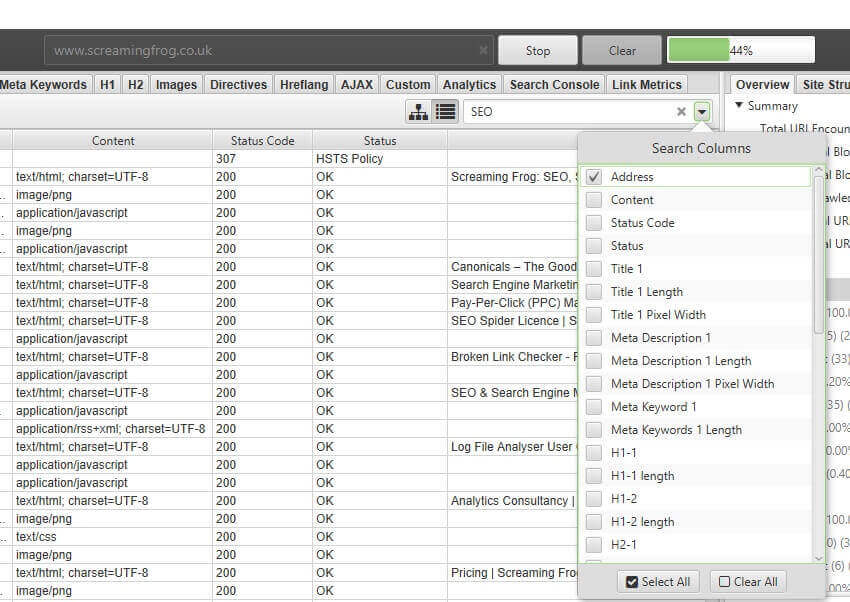 This obviously makes the search functionality quicker, and more useful.

Google increased the average length of SERP snippets significantly in November last year, where they jumped from around 156 characters to over 300. Based upon our research, the default max description length filters have been increased to 320 characters and 1,866 pixels on desktop within the SEO Spider.

The lower window SERP snippet preview has also been updated to reflect this change, so you can view how your page might appear in Google.

It’s worth remembering that this is for desktop. Mobile search snippets also increased, but from our research, are quite a bit smaller – approx. 1,535px for descriptions, which is generally below 230 characters. So, if a lot of your traffic and conversions are via mobile, you may wish to update your max description preferences under ‘Config > Spider > Preferences’. You can switch ‘device’ type within the SERP snippet emulator to view how these appear different to desktop.

As outlined previously, the SERP snippet emulator might still be occasionally a word out in either direction compared to what you see in the Google SERP due to exact pixel sizes and boundaries. Google also sometimes cut descriptions off much earlier (particularly for video), so please use just as an approximate guide.

Finally, if you forget to connect to Google Analytics, Google Search Console, Majestic, Ahrefs or Moz after you’ve started a crawl, or realise at the very end of a crawl, you can now connect to their API and ‘request API data’, without re-crawling all the URLs. 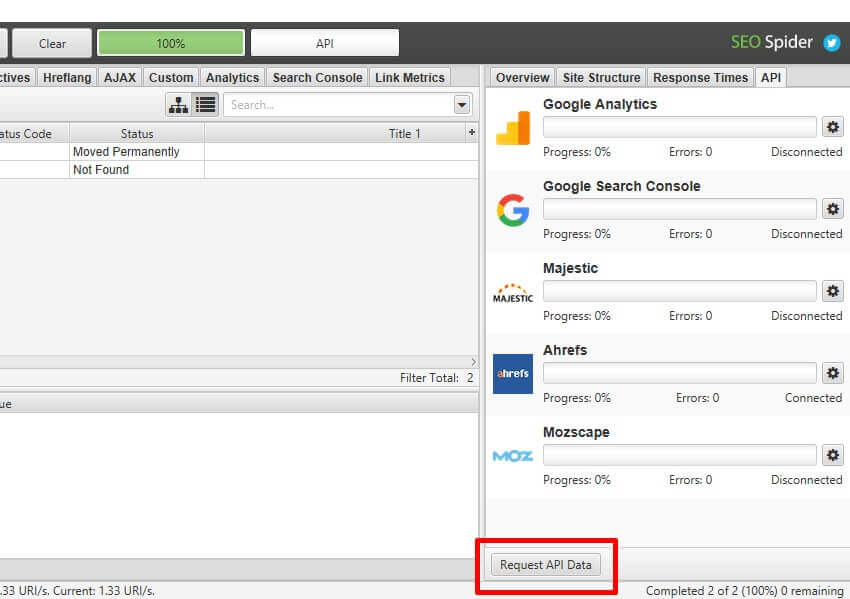 Version 9.0 also includes a number of smaller updates and bug fixes, outlined below.

That’s everything for now. This is a big release and one which we are proud of internally, as it’s new ground for what’s achievable for a desktop application. It makes crawling at scale more accessible for the SEO community, and we hope you all like it.

As always, if you experience any problems with our latest update, then do let us know via support and we will help and resolve any issues.

We’re now starting work on version 10, where some long standing feature requests will be included. Thanks to everyone for all their patience, feedback, suggestions and continued support of Screaming Frog, it’s really appreciated.

Now, please go and download version 9.0 of the Screaming Frog SEO Spider and let us know your thoughts.

We have just released a small update to version 9.1 of the SEO Spider. This release is mainly bug fixes and small improvements –

We have just released a small update to version 9.2 of the SEO Spider. Similar to 9.1, this release addresses bugs and includes some small improvements as well.

We have just released a small update to version 9.3 of the SEO Spider. Similar to 9.1 and 9.2, this release addresses bugs and includes some small improvements as well.

We have just released a small update to version 9.4 of the SEO Spider.