Since the release of version 13 in July, we’ve been busy working on the next round of features for version 14, based upon user feedback and as always, a little internal steer.

Let’s talk about what’s new in this release.

While arguably not the most significant feature in this release, it is used throughout the screenshots – so it makes sense to talk about first. You can now switch to dark mode, via ‘Config > User Interface > Theme > Dark’. 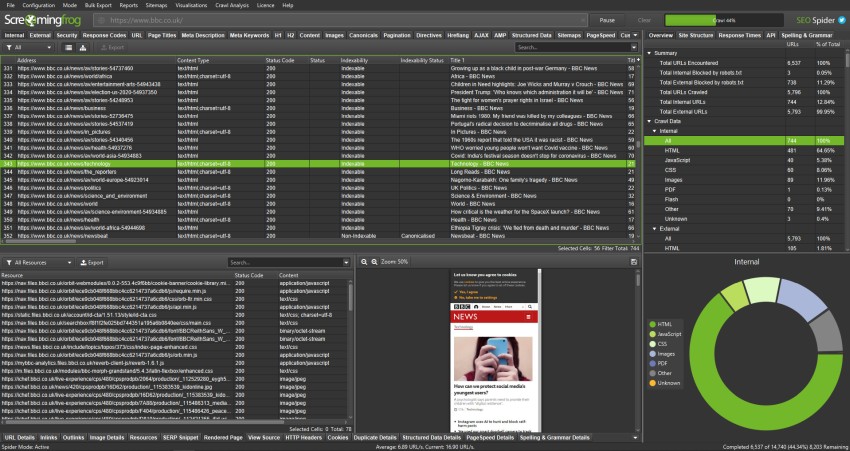 Not only will this help reduce eye strain for those that work in low light (everyone living in the UK right now), it also looks super cool – and is speculated (by me now) to increase your technical SEO skills significantly.

The non-eye-strained among you may notice we’ve also tweaked some other styling elements and graphs, such as those in the right-hand overview and site structure tabs.

You can add multiple Google accounts and connect to any, quickly, to save your crawl data which will appear in Google Drive within a ‘Screaming Frog SEO Spider’ folder, and be accessible via Sheets.

Many of you will already be aware that Google Sheets isn’t really built for scale and has a 5m cell limit. This sounds like a lot, but when you have 55 columns by default in the Internal tab (which can easily triple depending on your config), it means you can only export around 90k rows (55 x 90,000 = 4,950,000 cells).

If you need to export more, use a different export format that’s built for the size (or reduce your number of columns). We had started work on writing to multiple sheets, but really, Sheets shouldn’t be used in that way.

This has also been integrated into scheduling and the command line. This means you can schedule a crawl, which automatically exports any tabs, filters, exports or reports to a Sheet within Google Drive.

You’re able to choose to create a timestamped folder in Google Drive, or overwrite an existing file. 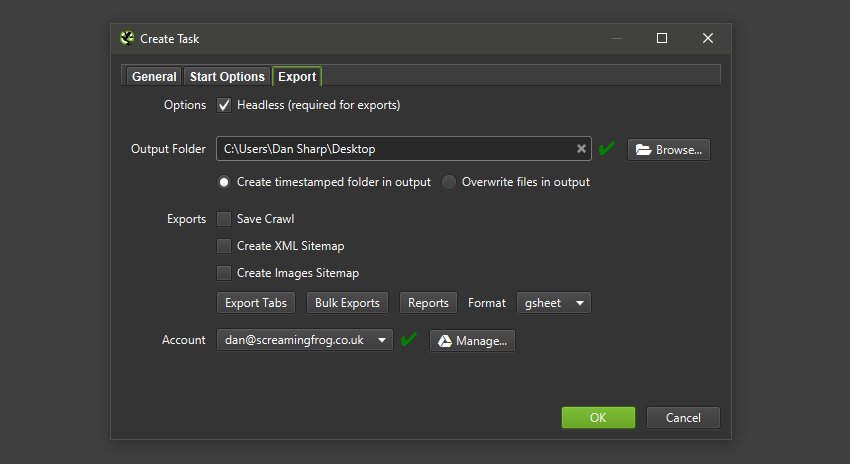 This should be helpful when sharing data in teams, with clients, or for Google Data Studio reporting.

You can now store, view and query full HTTP headers. This can be useful when analysing various scenarios which are not covered by the default headers extracted, such as details of caching status, set-cookie, content-language, feature policies, security headers etc.

You can choose to extract them via ‘Config > Spider > Extraction’ and selecting ‘HTTP Headers’. The request and response headers will then be shown in full in the lower window ‘HTTP Headers’ tab.

The HTTP response headers also get appended as columns in the Internal tab, so they can be viewed, queried and exported alongside all the usual crawl data.

Headers can also be exported in bulk via ‘Bulk Export > Web > All HTTP Headers’.

You can now also store cookies from across a crawl. You can choose to extract them via ‘Config > Spider > Extraction’ and selecting ‘Cookies’. These will then be shown in full in the lower window Cookies tab.

You’ll need to use JavaScript rendering mode to get an accurate view of cookies, which are loaded on the page using JavaScript or pixel image tags.

The SEO Spider will collect cookie name, value, domain (first or third party), expiry as well as attributes such as secure and HttpOnly.

You can also highlight multiple URLs at a time to analyse in bulk, or export via the ‘Bulk Export > Web > All Cookies’.

Please note – When you choose to store cookies, the auto exclusion performed by the SEO Spider for Google Analytics tracking tags is disabled to provide an accurate view of all cookies issued.

This means it will affect your analytics reporting, unless you choose to exclude any tracking scripts from firing by using the Exclude configuration (‘Config > Exclude’) or filter out the ‘Screaming Frog SEO Spider’ user-agent similar to excluding PSI in this FAQ.

The SEO Spider now displays the number of URLs discovered in each directory when in directory tree view (which you can access via the tree icon next to ‘Export’ in the top tabs).

This helps better understand the size and architecture of a website, and some users find it more logical to use than traditional list view. 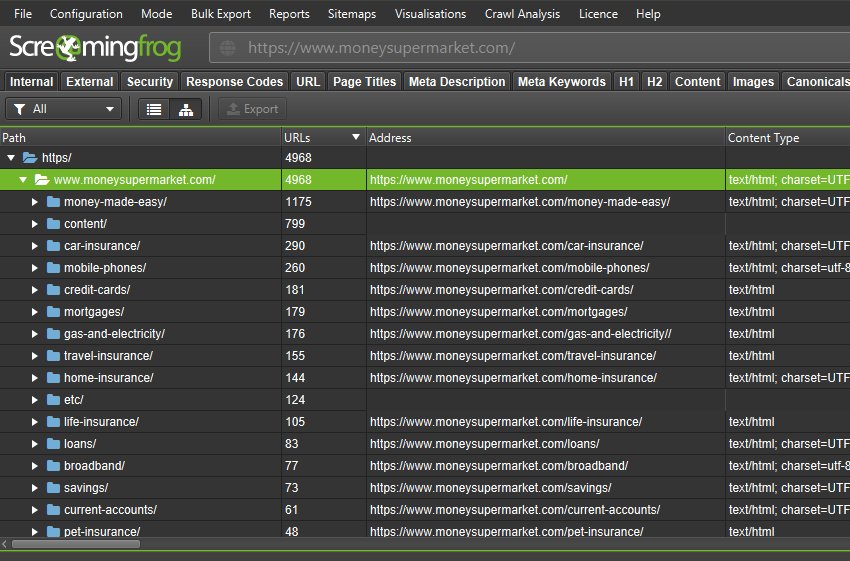 Alongside this update, we’ve improved the right-hand ‘Site Structure’ tab to show an aggregated directory tree view of the website. This helps quickly visualise the structure of a website, and identify where issues are at a glance, such as indexability of different paths.

If you’ve found areas of a site with non-indexable URLs, you can switch the ‘view’ to analyse the ‘indexability status’ of those different path segments to see the reasons why they are considered as non-indexable. 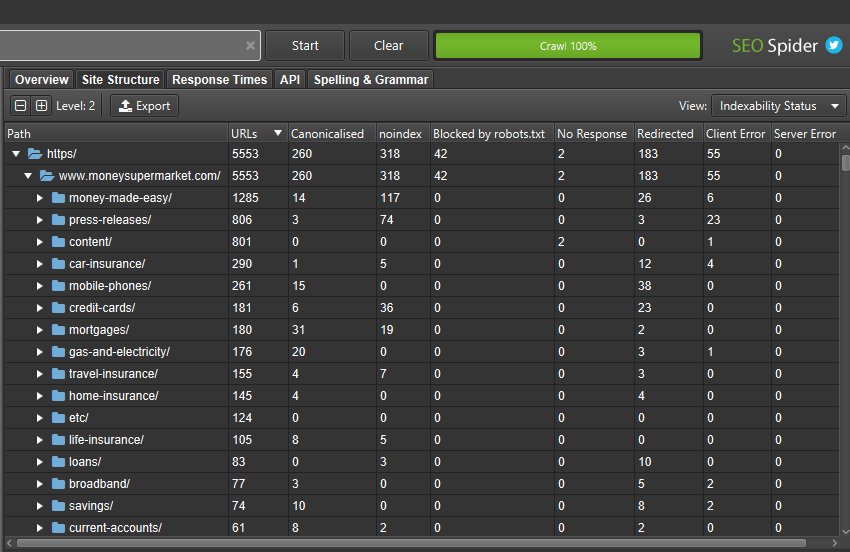 You can also toggle the view to crawl depth across directories to help identify any internal linking issues to areas of the site, and more. 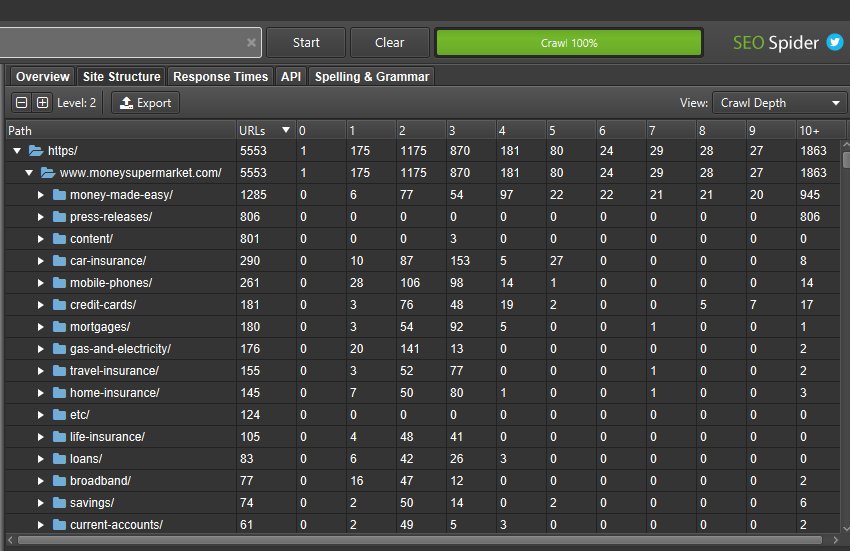 This wider aggregated view of a website should help you visualise the architecture, and make better decisions for different sections and segments.

These are both enabled by default via ‘Config > Spider > Advanced’, and will mean non-indexable pages won’t be flagged in appropriate on-page filters for page titles, meta descriptions, or headings. 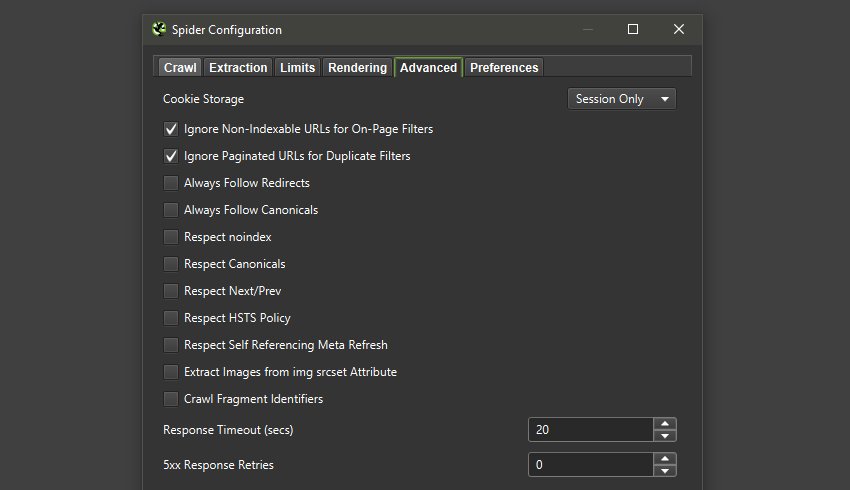 This means URLs won’t be considered as ‘Duplicate’, or ‘Over X Characters’ or ‘Below X Characters’ if for example they are noindex, and hence non-indexable. Paginated pages won’t be flagged for duplicates either.

If you’re crawling a staging website which has noindex across all pages, remember to disable these options.

These options are a little different to the ‘respect‘ configuration options, which remove non-indexable URLs from appearing at all. Non-indexable URLs will still appear in the interface, they just won’t be flagged for relevant issues.

Version 14.0 also includes a number of smaller updates and bug fixes, outlined below.

That’s everything for now, and we’ve already started work on features for version 15. If you experience any issues, please let us know via support and we’ll help.

Thank you to everyone for all their feature requests, feedback, and continued support.

Now, go and download version 14.0 of the Screaming Frog SEO Spider and let us know what you think!

We have just released a small update to version 14.1 of the SEO Spider. This release is mainly bug fixes and small improvements –

We have just released a small update to version 14.2 of the SEO Spider. This release includes a couple of cool new features, alongside lots of small bug fixes.

For a page to ‘pass’ the Core Web Vital Assessment it must be considered ‘Good’ in all three metrics, based upon Google’s various thresholds for each. If there’s no data for the URL, then this will be left blank.

This should help identify problematic sections and URLs more efficiently. Please see our tutorial on How To Audit Core Web Vitals.

Bookmarks are a useful way to link users to a specific part of a webpage using named anchors on a link, also referred to as ‘jump links’ or ‘anchor links’. However, they frequently become broken over time – even for Googlers.

To help with this problem, there’s now a check in the SEO Spider which crawls URLs with fragment identifiers and verifies that an accurate ID exists within the HTML of the page for the bookmark.

You can enable ‘Crawl Fragment Identifiers’ under ‘Config > Spider > Advanced’, and then view any broken bookmarks under the URL tab and new ‘Broken Bookmark’ filter. 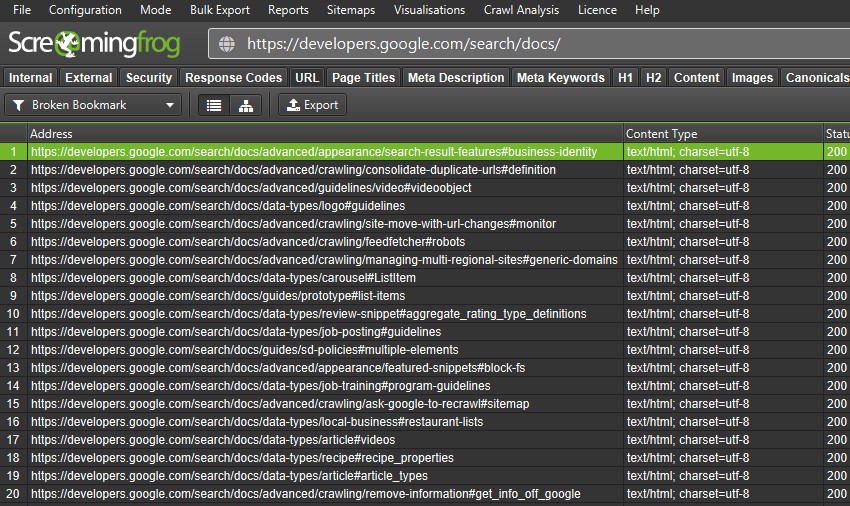 You can view the source pages these are on by using the ‘inlinks’ tab, and export in bulk via a right click ‘Export > Inlinks’. Please see our tutorial on How To Find Broken Bookmark & Jump Links.

We have just released a small update to version 14.3 of the SEO Spider. This release is mainly bug fixes and small improvements –