Links are, and will continue to be, one of the most important ranking factors in the eyes of Google. They are essentially seen as votes of confidence of one website endorsing another. This is why the process of building quality and/or relevant links to a site can be so important.

As such, website owners are conscientious when it comes to who they link to. Thankfully, there are ways to qualify your outbound links to search engines and provide additional context to the relationship of the linked page.

What Is the Nofollow Link Attribute?

The nofollow attribute is a HTML tag that’s applied to a link with the use of rel=. The rel= attribute, short for relationship, is intended to help people provide additional context to search engines when they link to an external website.

When the nofollow attribute is applied to a link, this tells search engines that you don’t want to associate with the site in question, endorse them, or crawl the page you’ve linked to from your site.

The attribute was introduced way back in 2005 as a way to combat comment spam. This was a method of building links by submitting blog comments with links on authoritative websites. Webmasters quickly became inundated with spammy comments that linked out to low quality, and often untrustworthy websites. The nofollow attribute could be automatically applied to any area of a site that allowed user-generated content, such as comments and forum posts.

More recently, Google have evolved the nofollow attribute slightly, as well as introducing two new link attributes: sponsored and ugc(explored further on in this post). Within their guidelines, Google explicitly states that the attributes are now seen as a hint, whereas previously it was seen as a directive:

Hint. It was a directive until the announcement. It’s a hint now.

If nofollow was being used to block a page from being indexed, which Google have never recommended, other techniques should be used such as the meta robots tag noindex.

Why is Nofollow Important

As search engines evolved and grew, so did the needs of webmasters. The nofollow attribute allows people to link to websites without associating with them or having it seen as an endorsement. As well as this, people can engage in legitimate marketing techniques, such as purchasing banner ads or sponsoring events, without being concerned that the links (that are often a by-product) may violate Google’s strict linking guidelines.

Over time, the introduction of nofollow and its wide adoption helped reduce the amount of spam in general, whether comment spam or people pursuing paid linking opportunities. This ultimately results in a better experience for users and helps webmasters to avoid potential penalties.

There are also rare instances where you may use the nofollow attribute on internal links, which is detailed later in this guide.

How to Nofollow a Link

On the surface, links with and without a nofollow attribute look the same. It’s not until you inspect the code that you’ll notice the difference.

The below link is a default, “followed” (sometimes referred to as “dofollow”) link:

The below link has the nofollow attribute applied:

As well as individually applying the nofollow attribute to each link, it’s also possible to nofollow all of the links on a page using the robots meta tag:

This means that no outlinks on a page, internal or external, will pass PageRank.

When to Use Nofollow

The nofollow attribute was originally introduced to combat comment spam; however, the ugc attribute has essentially replaced the nofollow for this use case.

As per their guidelines, Google states that the nofollow should be used when you want to link to a page, but you don’t want to be associated with it or have it seen as any type of endorsement.

For example, perhaps you want to blog about a company you had a bad experience with and want to link to their website. The nofollow attribute allows you to do this, without associating yourself with them or passing any value.

As well as this, Google also states that a nofollow should be used for ads or sponsored links, to help avoid any potential violations of their guidelines. However, they have detailed that they prefer the use of sponsored for this purpose.

The use of nofollow isn’t restricted to just outbound links, there may also be rare occasions where you’ll want to nofollow internal links too. One common way of using nofollow is to aid crawl budget. For example, if your site uses faceted navigation that allows users to filter certain aspects of a page.

Because this filtered content is often near-duplicate, Google is unnecessarily crawling lots of similar pages, thus wasting resources. As such, you could consider adding a nofollow attribute to these filters in an effort to discourage Google from crawling them.

In general, Google will adhere to a nofollow, but because it is now a mere hint, they may decide to use signals for indexing or scoring in some scenarios. Pages should instead be blocked through other means, such as using robots.txt or the URL Parameters Tool. There’s no reason why you can’t use nofollow in conjunction with these in an effort to better communicate your intention to search engines.

Whether or not nofollow links pass SEO value is a hotly debated topic. When the attribute was originally introduced, they stated that when they see the nofollow attribute applied to a link, those links won’t get any credit when it comes to ranking websites in their search results.

However, now that Google treats them as hints, it’s possible that they may ignore the attribute and factor the link within their scoring. There’s no way to determine the stance that Google are taking on a link, and while people have crunched swathes of data around nofollow versus followed links, there are no concrete findings.

Nofollow links are completely natural and play an important role in diversifying your backlink profile. As well as this, they have numerous indirect benefits, such as the potential to drive targeted traffic, increase brand awareness and aid social media efforts.

These days many of the biggest news outlets have strict linking policies, and blanket nofollow all outbound links. It’s easy to become disheartened when you receive a link from a high authority website and see that it’s nofollow; however, the other factors, such as their large readerships, can still greatly benefit your campaign.

Although Google were the first to introduce nofollow and the following additional attributes, other search engines have also followed suit. While the documentation is often patchy, Bing have been one of the clearest communicators when it comes to their support of nofollow, ugc and sponsored attributes. Yahoo uses Bing, and Bing often replicate Google, thus they also see the rel attributes as a hint rather than a directive.

Other search engines, such as Yandex, mention rel=nofollow within their documentation, but the way they perceive it can differ to Google. Yandex mention that nofollow is seen by the robot as a recommendation to ignore the link and hide it from indexing.

Google’s stance is the one you should pay most attention too, due the sheer size of their market share over other search engines.

Google’s latest iteration of nofollow from a directive to a hint also saw the introduction of two new attributes: ugc and sponsored. According to their guidelines, they introduced these as a way for webmasters to provide even greater context to search engines on a more granular level than nofollow

UGC stands for User Generated Content and, as the name suggests, is used for links contained within content provided by users of your site. This includes areas such as comments and forum posts, which are often the target for people looking to build quick and easy links to their sites.

Ugc is implemented in the same way as nofollow, using the rel= attribute, for example:

Interestingly, Google recommends that you can consider removing this attribute from links posted by trusted contributors as a way to reward them:

Regarding sponsored, this should be applied to any advertisements or paid placements on other websites. Due to Google’s strong stance on paid links, this helps to avoid any potential issues as a result of genuine marketing methods, such as sponsoring a newsletter or event.

As well as this, Google have stated that sponsored should also be used for affiliate links if possible.

Yep. And definitely use rel=sponsored for affiliate links, if you can. And to be more complete: affiliate links are not bad. It’s fine to monetize your site. Google’s OK with that. There’s no need to hide them, just use the right kind of link if you can.

Again, the sponsored attribute is implemented using rel=. As we can see below:

It’s worth noting that you can also specify multiple attributes at the same time, using either a space or a comma to separate them, for example:

Do You Need to Update Old Links With New Attributes?

Webmasters were initially concerned about the introduction of the rel= attributes. At the time, nofollow had been in use for nearly 15 years, and there were questions around whether historical user generated content and paid placements would need to have new attributes retrospectively applied.

Thankfully, this isn’t necessary. Google clearly states that old nofollow attributes on paid placements or links within user generated content do not need to be updated.

Some CMSs, such as WordPress, will automatically add the correct ugc attribute to comment sections of your site by default.

The Screaming Frog SEO Spider can help you easily find nofollow, ugc and sponsored links on your website. 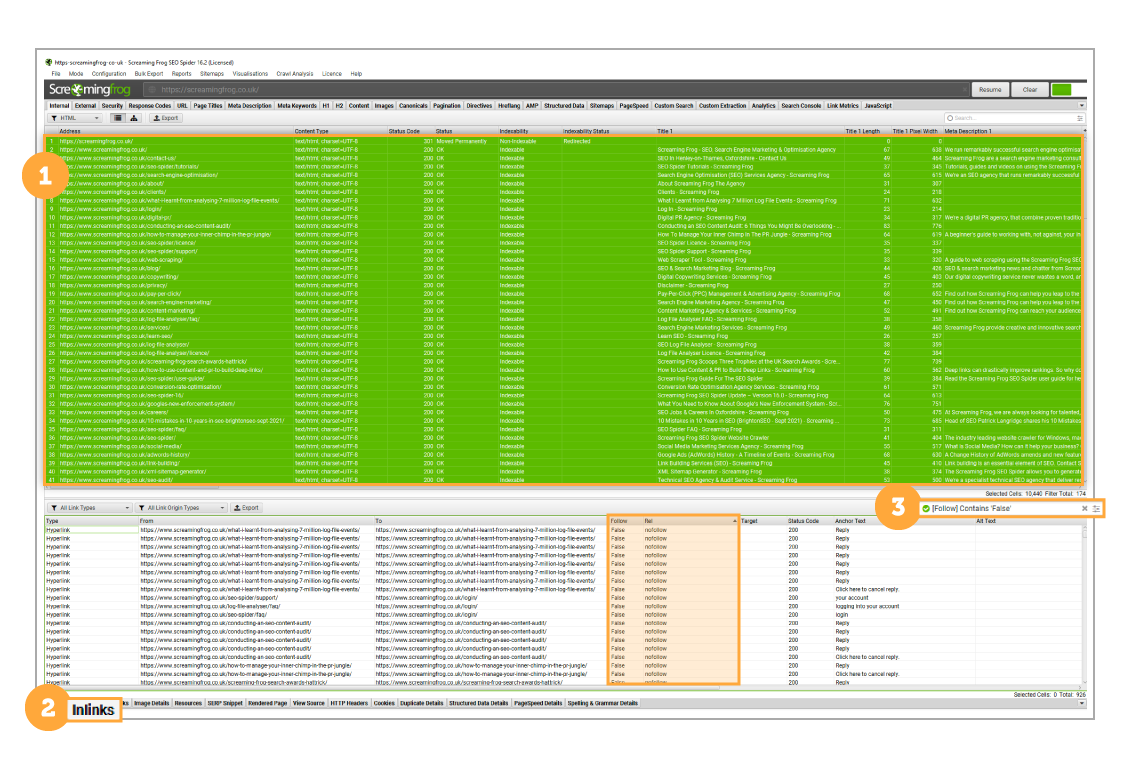 To find nofollow links, type the following within the lower pane search box:

By default, the spider wont crawl internal/external nofollow, but this can be changed within Configuration > Spider > Crawl to ensure you’re getting a comprehensive crawl of your site.

You can do the same for external links (sites you link out to) by selecting the External tab, and then the Inlinks tab in the bottom pane. This could be useful, for example, if you wanted to find affiliate links you haven’t yet marked as sponsored.

There are also several browser extensions available for Chrome, Firefox and more that allow you to highlight nofollow links on a page, making it easy to identify them without having to look at the code.

One of the biggest takeaways from this post is that nofollow, ugc and sponsored are now seen as hints in the eyes of Google, and not directives. Each one has its own direct and indirect benefits, and a natural, sustainable link profile will consist of a varied mix of these.

Do not be discouraged from pursuing or collaborating with websites due to their use of these attributes, and instead consider the value provided from their readership and the potential to drive relevant, targeted traffic. After all, that’s what links were ultimately designed to do.